Civilians must join in national revamp

Civilians must join in national revamp 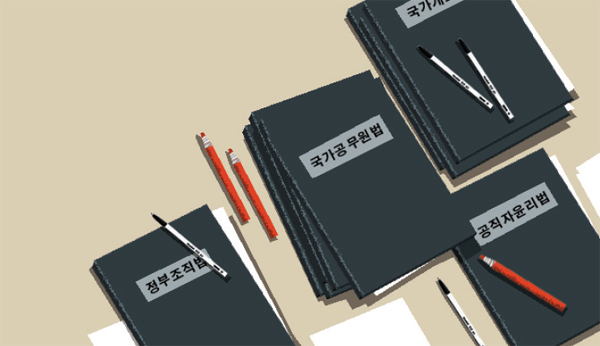 Tears can convey a more powerful message than 100 words, which is why people paid such close attention to President Park Geun-hye’s emotional apology on Monday during her nationally televised address. It seemed successful, initially. Even Kim Han-gill, co-chairman of the New Politics Alliance for Democracy, recognized her sincerity.

However, what came after the tears dried up matters more. Her reform plans - which include dissolving the Coast Guard, reorganizing the Ministry of Security and Public Administration and establishing a national safety agency - are drastic yet rough. They must be refined and the specifics discussed.

Civilian experts say, for instance, that the plan to dissolve the Coast Guard and transfer its operations to a new national safety agency is inappropriate. Yoon Dong-geun, a professor at Ulsan National Institute of Science and Technology, says that the national safety office’s core function should be managing and controlling disasters and accidents. When it is charged with the Coast Guard’s old job of controlling Chinese fishing vessels and keeping Japan’s infringement of Korea’s territorial right over Dokdo at bay, it cannot concentrate on disaster prevention. The mistakes of the Sewol ferry disaster could be repeated, he said. He added that the Korean government has proposed a one-time solution to disband the Coast Guard, while the United States took more than a year to discuss with specialists before creating the U.S. Department of Homeland Security after the Sept. 11, 2001, attacks.

A reorganization of the Ministry of Security and Public Administration is also problematic. Former officials from the ministries of government administration and domestic affairs may fight over who to send where. In fact, there are already rumors about who would remain in Seoul and who would go to Sejong City in the new national safety agency, the administrative reform agency and the department of administration and autonomy. The government ministries that oversee key functions in domestic and foreign affairs remained in Seoul when most government offices were relocated to the new administrative capital of Sejong. Civilian experts in our Constitution should contribute their wisdom to prevent unnecessary discord.

The public will not be convinced if the bureaucrats make plans in the closed room to root out the “bureaucratic mafia.” Human resources specialists with corporate experience, public administration scholars and experts in other fields should be included in the discussion. It is not an option but a must to have experts participate in the revision of the Government Organization Act, the Public Servants Act and the Public Service Ethics Act.

The author is a national news reporter
of the JoongAng Ilbo.