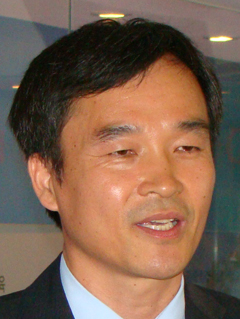 Jeong Byeong-hak, a science teacher at Sukjung Middle School in Yeongwol County, Gangwon, was awarded the second annual Beaknong Prize this year on May 15 at Chundong High School for his proven dedication to education and learning.

Jeong, 49, has worked at Seokjung Middle School since 1995 after graduating from Kangwon University. Just a few years after he started teaching in 2002, he noticed that a tremendous amount of waste rock had flowed into his village from the mountains around Yeongwol and Jeongseon counties after a recent flood.

The rock had eroded and washed away from the Sangdong mine, which used to be the largest tungsten mine in Korea. Full of heavy metals, the debris could have a disastrous effect for the health of the townspeople as well as the surrounding environment.

So Jeong decided to do something about it. He organized an environmental club with his middle school students with the goal of finding
a scientifically sound solution to the issue before it became a significant problem.

He and his students started researching the most appropriate plant life that would slow down the erosion of the mine’s waste rock and prevent it from flowing into the village via rainwater when it was implanted around the mountain area. After five years of trial and error, the club figured out that flame grass - a tall, dense plant - was their best option.

He and his students also found the perfect compost in which to grow the foliage.

Leftover sediment from the nearby sewage treatment plant was another environmental hazard, but when mixed with barely contaminated mountain soil - which had a high acidity level from the tungsten and coal - the combination acted as an efficient neutralizer and provided stable conditions for the flame grass to grow.

The project helped Jeong obtain advanced degrees. He used the data in his research, and his students won accolades over six consecutive years at national science fairs.

The 10 million won ($9,750) prize money he received, he added, will be go toward research costs for his students’ experiments.

The Beaknong Prize was established by the Jungdong School Alumni Association to honor Beaknong Choi Kyu-dong, who established the Chungdong School, which is now Chundong High School, and served as the first president of Seoul National University.