Professor keeps his focus on relations with China

Professor keeps his focus on relations with China 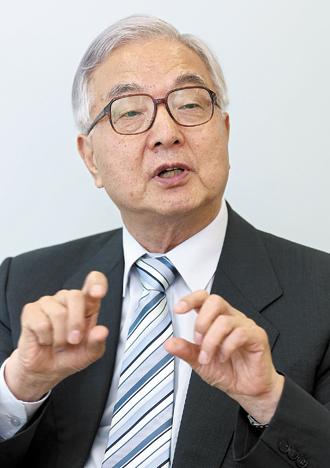 President Xi Jinping is expected to visit Seoul next month to hold a summit with President Park Geun-hye as a follow-up to Park’s trip to China last June, and it is imperative that the two leaders reach a consensus on North Korea’s nuclear ambitions during their summit, said Chung Jong-wook, 74, the former Korean ambassador to Beijing.

“North Korea has a high chance of conducting nuclear tests in the future,” he said in an interview on May 16 with the JoongAng Ilbo at its headquarters in central Seoul. “As it stands now, tension will only heighten.”

Chung, who is the new head of Incheon National University’s China research center, added, “In order to work toward bringing North Korea into talks, there is a need for us to hold a more flexible position. If six-party talks are held, within that framework there will be more room for cooperation between South Korea and China. As Japan becomes more extremist, there is a need for Korea and China to give a united warning.”

China has always been a key point of interest for Chung, a lifelong scholar, ever since Henry Kissinger’s secret visit to China in 1971 as the U.S. national security adviser. Chung went on to write his doctoral dissertation on China at Yale University, and 40 years later his interest hasn’t faded.

Under President Kim Young-sam, Chung served as the presidential foreign affairs and security secretary from 1993 to 1994, and ambassador to China from 1996 to 1998. But he has served more years working as a professor at various schools, including Seoul National University.

When asked if there was a change in China’s attitude toward North Korea since Xi took office, he responded, “China’s DNA did not change. China is prepared for sudden change in North Korea, and while it is true that China and North Korea’s strategic bond has weakened, China will not give up on North Korea.”

Chung also touched upon the lack of top Chinese research institutes in Korea during his interview.

“The biggest problem is that many China research institutes have inadequate budgets and lack personnel,” he said. “But they are also managed in a department store-style fashion, in which they must handle all areas related to China - politics, foreign and economic affairs, and security.”

Incheon National University’s new research center combines several of the school’s China-related departments. Chung said he hoped it would contribute to improved exchanges between Korea and its eastern neighbor.