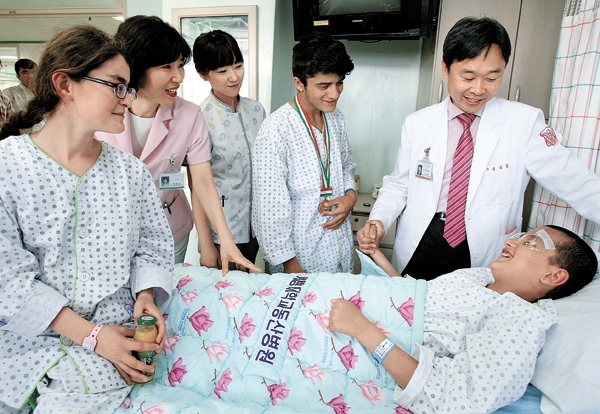 Chang Sung-dong, far right, a doctor at Keimyung University’s Dongsan Medical Center in Daegu, examines a 15-year-old boy from Tajikistan after open-eye surgery at the hospital. By Gong Jeong-sik

“Doctor, I can see!” called out Musamirzoda Omina, a 13-year-old girl from Tajikistan.

The teenager was accompanied by a group of nine students from Tajikistan, all with severe vision impairments. Mostly adolescents, with one in his early 20s, the group had traveled to Korea to receive corrective eye surgery. Earlier this month, following the procedures, they sat together on the shores of Haeundae Beach in Busan, watching the waves crash on the golden sands. For the students, the scene was that much more splendid because it marked one of the first times they had clearly experienced the world.

Omina suffered from serious myopia and could barely see shapes just 30 centimeters (one foot) in front of her. She was also cross-eyed, so glasses were not an option for her.

She came to Korea on May 12 to have open-eye surgery the following day, and through the operation, she was able to gain 0.3 vision - considered standard, with just a little blurriness.

“I no longer have to hide behind my friends,” Omina said. “I didn’t even know that the boy lying in the bed next to mine was so good-looking.”

The students, who all attend a national school for the visually impaired in Hisor, a city in western Tajikistan, came to Korea to receive eye surgery at Keimyung University’s Dongsan Medical Center in Daegu.

In Hisor, there is no proper hospital, much less an optometry clinic. There is one in Dushanbe, the country’s capital, but the treatment, worth at least $1,500, is beyond affordable for their families. The medical center devised the plan to help the Tajikistani students, part of the hospital’s philanthropic efforts, and provided the surgery - worth 90 million won ($87,930) altogether - free of charge.

Another 23-year-old student received refractive lens surgery and regained a vision of 0.32. Because of his eye impairment, Valiyev Sharifhon, now a 12th-grader, was forced to start school later than his peers.

“If I ever become the mayor of Hisor,” he said, “I want to help improve the inadequate medical environment and enable opportunities like the one I received.”

For a week in July, doctors from Keimyung University’s Dongsan Medical Center will visit Tajikistan to provide follow-up examinations for the students who had operations here.

“For those Tajikistanis who could not come to Korea due to passport issues, we plan to provide free eye surgery there,” said Lee Se-yub, the director of Dongsan Medical Center.