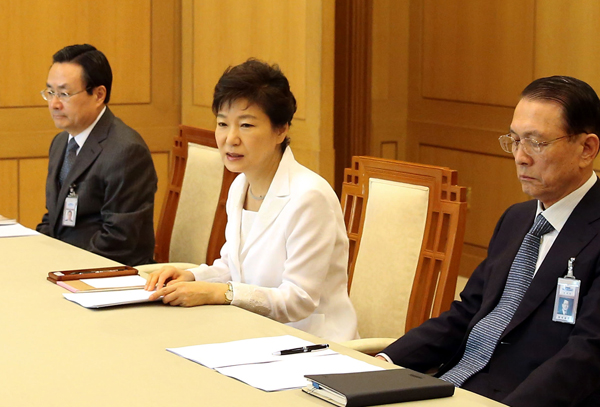 President Park Geun-hye yesterday presides over a meeting at the Blue House to discuss North Korea’s provocation a day earlier in West Sea, with Kim Ki-choon, her chief of staff, right, Ju Chul-ki, senior secretary for foreign affairs and national security, and a few other key officials. [NEWSIS]

Pyongyang announced yesterday it will participate in the upcoming 2014 Incheon Asian Games Competition, a day after it fired artillery shots across the disputed western maritime border in the East Sea toward a South Korean Navy vessel.

The North Korean Olympic Committee said it will participate in the 17th Asian Games hosted by South Korea, reported the regime’s official Korean Central News Agency yesterday. It said Pyongyang had conveyed this message to the Olympic Council of Asia.

It said that the North Korean Olympic Committee will “soon make necessary applications according to the rules” set by the Olympic council and the organizing committee of the Games.

This is the third time the Games are being held in South Korea. North Korea didn’t participate in the 1986 competitions held in Seoul but did in the 2002 Busan Games with a delegation of nearly 200 athletes and 100 cheerleaders.

This will be the first North Korean athletic delegation to come to the South since its women’s football team competed in the Women’s East Asian Cup last July held in Seoul and Gyeonggi.

South Korean organizers of the Asian Games and the International Olympic Committee have encouraged Pyongyang to participate in the Incheon Games. In January, North Korea said it would send its men’s and women’s soccer team.

However, Pyongyang’s announcement of full participation in the Games came as South Korea issued a stern warning following the North’s latest military provocations.

North Korea fired two artillery shells over the Northern Limit Line (NLL), the de facto maritime border with North Korea, a little after 6 p.m. on Thursday, according to the Joint Chiefs of Staff.

The shells landed just 150 meters (492 feet) away from a South Korean Navy vessel patrolling waters near Yeonpyeong Island in the Yellow Sea, where dozens of South Korean and Chinese fishing boats and vessels were present.

The shells fired by both sides fell into the sea without causing any casualties or damage, according to defense officials.

Hundreds of residents of Yeonpyeong Island were evacuated to bomb shelters for safety reasons.

In response, President Park Geun-hye yesterday convened an unscheduled security and foreign affairs ministers’ meeting to discuss the provocations and a response.

“I express very strong regret that North Korea makes such provocations at a time when our people are in deep sadness after the Sewol disaster,” said Park at the meeting, according to her spokesman.

Park ordered a strengthening of U.S. and Korean joint defense posture “and a bolstering of cooperation with China and other related nations on North Korea,” said presidential spokesman Min Kyung-wook.

The meeting came a day after the Blue House on Thursday made the surprise announcement that the president accepted the resignation of Kim Jang-soo, chief of the presidential office’s National Security Council, and National Intelligence Service chief Nam Jae-joon as part of a major overhaul of the administration.

The sudden meeting, which included Foreign Affairs Minister Yun Byung-se, Defense Minister Kim Kwan-jin and Kim Kyou-hyun, first deputy national security adviser, appears to be an attempt to show there will be no gap in security amid the reshuffle.

The South’s Ministry of National Defense said that North Korea said at 8:25 a.m. yesterday through military channels that it was not related to the shelling of the South Korean vessel the previous day.

Ministry spokesman Kim Min-seok called North Korea’s claims “a shameless lie to evade responsibility for its provocations that will subject it to ridicule by the international community.”

Kim added, “We have already sent a stern warning to the North” on Thursday through military communication channels, and “made it clear that if such provocations are continued, we will respond firmly.”

In a statement, the ministry later said that North Korea is “interfering with our military’s regular security operations” and “has a motive of ignoring the NLL as it is partly disputed.”

The North Korean military in a statement through KCNA yesterday denied the firing of artillery, accusing the South of “fabricating” the story.

It said the South’s Navy crossed its maritime border and intruded deep into its waters, firing at the North “under the pretext of cracking down on Chinese fishing boats” and that it was a “deception” from the South.

North Korea responded to this incident by calling a “deliberate grave provocative act” and warned it may strike the South “without any warning at the moment the latter detects any trifle provocation,” the KCNA reported Wednesday.

Washington was also critical of Pyongyang’s actions and urged North Korea “to refrain from provocative actions that aggravate tensions and instead focus on fulfilling its international obligations and commitments.”

U.S. State Department spokesman Jen Psaki said at a briefing Thursday that Washington is “closely monitoring the situation on the Korean Peninsula.”

The South’s Ministry of Unification said, “When the North Korean application [to participate in the Games] arrives, we will provide necessary support for the North Korean athletic delegation to enter the country.”