Murder suspect taken back to scene

Murder suspect taken back to scene 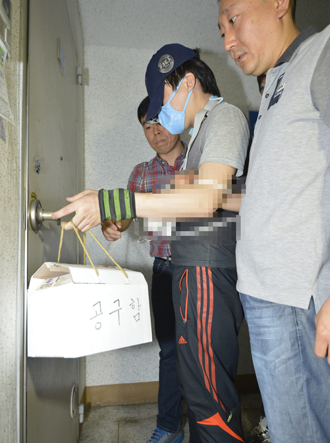 A 24-year-old suspect who allegedly killed his ex-girlfriend’s parents re-enacts the crime yesterday at the victims’ apartment in Daegu. [NEWS1]

The Daegu Dalseo Police Precinct is investigating a 24-year-old man who is suspected of murdering his ex-girlfriend’s parents at their apartment in Daegu on Monday and then forcibly detaining her there for hours.

The woman, identified only by her surname Kwon, reportedly managed to escape from the apartment on Tuesday morning by jumping from the fourth-floor window. She is currently hospitalized and receiving medical treatment for an injured pelvis.

Authorities took the suspect, surnamed Jang, to the crime scene yesterday to attempt to reconstruct the chain of events. He emerged from a police van wearing a cap and covering his face with a mask. A crowd, including the victims’ family members, swarmed around the premises, with some shouting at him.

When asked his motive for the crime, he answered shortly, “I am sorry, and I regret it.”

The reconstruction went on for about an hour inside the apartment.

According to the police, the couple dated for about two months from February to April, and during that time Jang would often beat Kwon when he was drunk. When her mother and father heard about the abuse, they apparently visited Jang’s parents in Sangju, North Gyeongsang, and asked them to separate the couple.

According to the statement Jang gave authorities, he visited the apartment Kwon and her parents shared in Daegu on Monday masquerading as a plumber. Police said he came back about 50 minutes later with a knife, which he used to kill Kwon’s parents.

Jang drank in the apartment while waiting for Kwon to return, police said. When she arrived home around midnight, the suspect took her hostage over approximately eight hours. She later jumped from the fourth-floor window in an attempt to flee.

Authorities used CCTV footage to track Jang and arrested him on Tuesday at his home in Gyeongsan, North Gyeongsang. On Wednesday, police requested an official arrest warrant for him on charges of homicide and unlawful confinement.