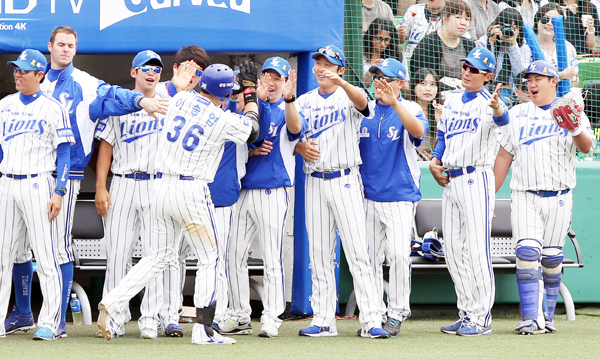 Designated hitter Lee Seung-yeop, No. 36, is praised by teammates after hitting a three-run homer in the bottom of the third yesterday against the Nexen Heroes in Daegu. By Jung Si-jong

The Samsung Lions have waited over the past few seasons for the chirp of the cicadas to signal the middle of summer - the time when the team has usually come alive.

It’s early for the cicadas now, but already the Lions are outpacing their traditional record: The Lions beat the Nexen Heroes 18-2 in a home game yesterday in Daegu, basking in what is now an 11-game winning streak.

Starter Rick VandenHurk picked up his first complete game in two seasons in Korea this time, in which he allowed two runs in nine innings while striking out 11.

Over the last 30 games, they stood 24-5, with one tie, and are currently on top in the Korea Baseball Organization (KBO) with a record of 28-13, with a tie, leading the runner-up Doosan Bears by four games.

The Lions set up anticipation for a win in just three innings, scoring 2 in the bottom of the first, and 11 more in the third thanks to designated hitter Lee Seung-yeop, who hit a three-run homer in that inning.

Early in the season, the team’s biggest problem was its starting rotation, and many of the players were struggling with minor injuries. But as the weather has warmed this month, their rotation has consisted of lefty ace pitcher Jang Won-sam, Rick VandenHurk, Yoon Sung-hwan, Bae Young-soo and J.D. Martin with a combined 20 wins - the most in the league.

“We might not have a dominant league-leading ace pitcher, but we think we are all above the league average,” said pitcher Yoon.

The team’s bullpen, led by closer Lim Chang-yong, eighth-inning setup pitcher Ahn Ji-man, Cha Woo-chan and Shim Chang-min, have been like an impenetrable fortress. In the last 144 games when the Lions had a lead in the seventh inning or later, they were undefeated. Lim is now 2-0 with 10 saves, with an ERA of 1.20. The team’s bullpen ERA is 3.43, and the Lions’ 4.08 team ERA is the best in the league.

The Lions’ hitters, led by cleanup hitter Choi Hyung-woo, who has hit six game-deciding RBIs, and veteran slugger Lee Seung-yeop, have been a terror for their opponents. Their top batting order with leadoff Yamaico Navarro and Park Han-yi have put the team in a prime position to score, and its hitters in the bottom lineup, including shortstop Kim Sang-soo and Jung Hyung-sik, have brought needed speed.

It’s hard to find any weaknesses right now: the Lions have 16 comeback wins, but have only suffered three come-from-behind losses in total, and its .250 winning percentage is the best in the league.

This past offseason, the Lions’ closer Oh Seung-hwan left for Japan’s Hanshin Tigers and center fielder Bae Yeong-seop joined the military, but those holes appear to have mattered little to the defending champions. Lim has been one of the league’s best closers since his return to the KBO, and the competition among Jung Hyung-sik, Kim Heon-gon, and Park Hae-min, three aspiring young outfielders, to fill Bae’s position has had a positive impact on the team.

“[Closer] Lim and Lee [Seung-yeop] have been leading this winning streak,” Ryu said. “They are the ones who come to the ball park first every morning and practice hard.”