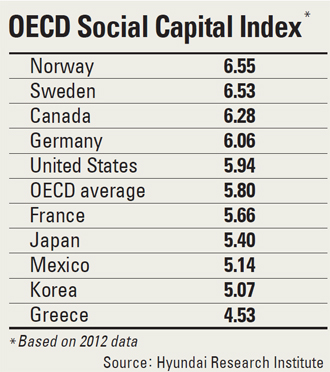 Korea’s social capital index ranking is close to the bottom among Organization for Economic Co-operation and Development (OECD) members, especially regarding lack of trust in the government and judicial system, a report from a local think tank said.

Hyundai Research Institute (HRI) said that in its own calculation, Korea’s social capital index was 5.07 out of 10, which made it 29th among the 32 countries in the OECD.

The index measures social capital, which refers to institutions, relationships and norms that shape the quality and quantity of a society’s social interactions, according to the World Bank.

HRI calculated its index in two parts - the private sector and public sector each having 15 separate indexes. In the private sector, it analyzed topics like how people trust each other and the social environment for sexual minorities. For the public sector it researched how much trust people have in government and the ease or difficulty of pursuing political goals.

HRI said lack of trust in the government and judicial system is Korea’s weakest area, giving it a rank of 31 out of 32 OECD countries.

The report also said people’s caring or trust in private areas is also poor. HRI said that a low level of generosity toward sexual minorities placed Korea at the bottom level of the OECD, while trust in relatives and friends was also low.

However, HRI said that Korea scored well in public and private participation, saying people’s participation in religious events and charities is high.