A woodblock, above, is inscribed with a portrait of Jeong Mong-ju, a Goryeo-era scholar, and his written work. The printed result from using the woodblock is shown on the right. Provided by the National Folk Museum of Korea

In a world flooded with digital storage, no one worries anymore about owning hard copies of written work.

But the situation was very different in both the Goryeo Period (918-1392) and the Joseon Dynasty (1392-1910). If an aristocrat wanted their own version of a document, they would need to duplicate every word manually on paper or onto a wooden printing block.

The National Folk Museum of Korea has prepared a display to detail how Korean ancestors shared the knowledge they acquired and tried to pass their enlightenment down to future generations.

The museum’s exhibition “Woodblocks: Strolling through the Bosk of Knowledge” shows how the method of inscribing a book’s contents onto woodblocks enabled the mass distribution of written documents. 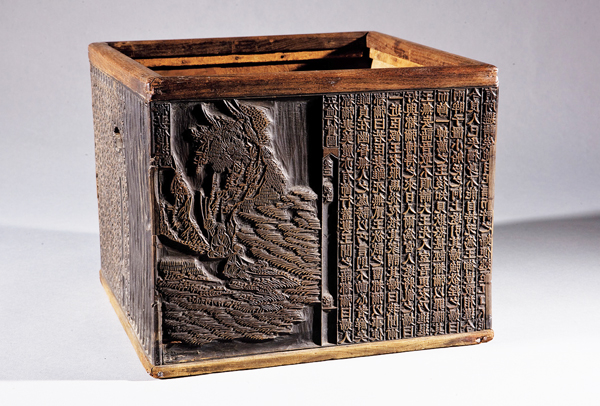 Left is the Oryunhaengsildo woodblock, a collection of writings on ethics.Provided by the National Folk Museum of Korea

“Once inscribed on woodblocks, making multiple copies of a book could be done within a single day,” said Choi Soon-guen, the museum’s senior curator. “The ancestors’ efforts to make information available to many helped the country develop better printing techniques.”

The woodblocks featured in the exhibition originally came from Joseon-era education centers in Andong, North Gyeongsang. They were stored there by the Korean Studies Advancement Center, which houses almost 65,000 wooden blocks, many of which are designated items of national cultural heritage.

These precious blocks may soon become more internationally popular as the Korean government recently decided to have them compete with artifacts submitted by other countries for the title of “Memory of the World,” a designation given by Unesco to worthwhile written records.

The final decision will be announced in June next year after Unesco officials visit Korea and see the items in person.

If the woodblocks are chosen, they will be the second set to earn the title from Unesco, followed by the Tripitaka Koreana, which are stored at Haein Temple in Hapcheon, South Gyeongsang.

Although their exteriors may look similar, the contents carved on the timber differ greatly.

“While the woodblocks in Haein Temple are records of Buddhist teachings,” Choi said, “the woodblocks recently up for Unesco nomination are inscribed with how our ancestors lived their everyday life, what they studied and what they mostly conversed about at the time.”

Pictured right is the exterior, and left, interior of a house containing 65,000 blocks of wood inscribed with the details of everyday life in Korea’s ancient kingdoms, in Andong, North Gyeongsang. Provided by the National Folk Museum of Korea

Inscriber Kim Gak-han, a nationally designated cultural asset, and his pupils demonstrate how the wood is carved during an allotted time slot at the exhibition. A page that is to be duplicated is placed onto the block, and the part surrounding the letters is carved out. Ink is then applied and clean paper is printed on.

An impression of a landscape with mountains, water and houses is printed onto pieces of paper that visitors can take home as a souvenir.

The exhibition “Woodblocks: Strolling through the Bosk of Knowledge” lasts until June 23 at the National Folk Museum of Korea. The museum is open at 9 a.m. Wednesday to Monday. It closes at 6 p.m on weekdays and 7 p.m. on Saturdays, Sundays and national holidays in May. From June, the museum will open until 6:30 p.m. on Mondays, Wednesdays, Thursdays and Fridays. The museum is closed Tuesdays. Admission is free. For more information, call (02) 3704-3114 or go to www.nfm.go.kr.