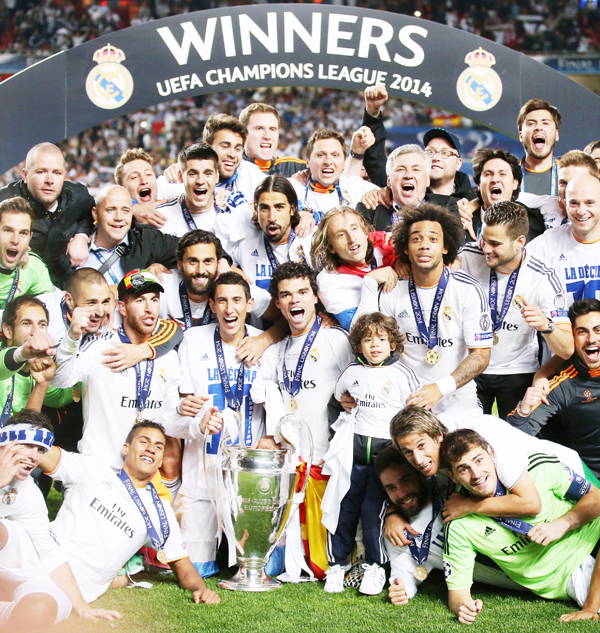 Real Madrid celebrate with the trophy after winning the UEFA Champions League against Atletico Madrid on Saturday at the Luz stadium in Lisbon with a score of 4-1. [REUTERS/NEWS1]

Real Madrid’s record 10th European title will be written down as a seemingly convincing 4-1 victory over Atletico Madrid.

In reality, “La Decima’’ was a lot harder to come by.

Atletico was minutes away from its first Champions League title on Saturday when Sergio Ramos began Real’s comeback by heading in the equalizer in injury time. Real then broke down Atletico’s resistance with three goals in the last period of extra time to create an unfairly lopsided score.

“It’s the most important goal I’ve ever scored,’’ Sergio Ramos said of his game-changing strike. “We made history against a great rival.”

As Atletico faded, Gareth Bale scored the winning goal with a header in the 110th minute, before Marcelo slotted in the third in the 118th and Cristiano Ronaldo polished off the win with a penalty at the end.

“Madrid was better,’’ said Atletico coach Diego Simeone, who lost his temper toward the end after failing to complete a La Liga-Champions League title double.

“They were able to get out on the break and that hurt our chances.’’

Diego Godin had put Atletico ahead when his 36th-minute header looped into a Real goal left vacant by captain and veteran goalkeeper Casillas’ reckless rush out.

Atletico - which had to substitute striker Diego Costa early in the first half - then simply wore out in extra time as the team failed to follow up on the Spanish league title it secured last weekend.

Had Atletico held on for its first European title, Ronaldo and Bale would have shared some of the blame for a series of missed chances in the 90 minutes.

Instead, the star forwards added to their storied club’s illustrious history in club football’s most prestigious competition.

Real coach Carlo Ancelotti also ties the record with three European Cup victories as a coach, after winning in 2003 and ’07 with AC Milan.

The Italian becomes the fifth coach to win with two different clubs.

“The hardest thing was to tie the game because it was so tough for us at that point,’’ Ancelotti said. “They suffocated the space and were doing it so well. The goal gave us strength.’’

Bale’s decisive goal sparked wilder celebrations, while Ronaldo pulled off his shirt before provoking tempers with a muscle-flexing pose after scoring his penalty - extending his record for a Champions League season to 17 goals.

Atletico coach Diego Simeone - known for his fiery temper - came on the pitch for a second time in extra time in the final minutes and confronted Real defender Raphael Varane after he kicked the ball toward the Atletico bench.

Simeone had to be restrained by his own staff and was sent to the stands.

“He’s a young player with a bright future, hopefully he learns,’’ Simeone said.

Ronaldo and Bale were both sent tumbling by tough tackles within three minutes, but it was Atletico’s 36-goal forward Costa who had to quit early.

Casillas charged from his line when Juanfran lifted a high ball toward the penalty spot and was stranded when Godin rose to loop a header toward the empty goal. The ball crossed the goal line before the veteran keeper could swipe it away.

In a second half of increasingly hectic Real attacks, Ronaldo tested Thibaut Courtois with a curling free kick but was off target with a pair of headers.

Bale was guilty of a series of miscued shots with the outside of his left boot, and a handball in the Atletico penalty area that added to Real fans’ frustrations.