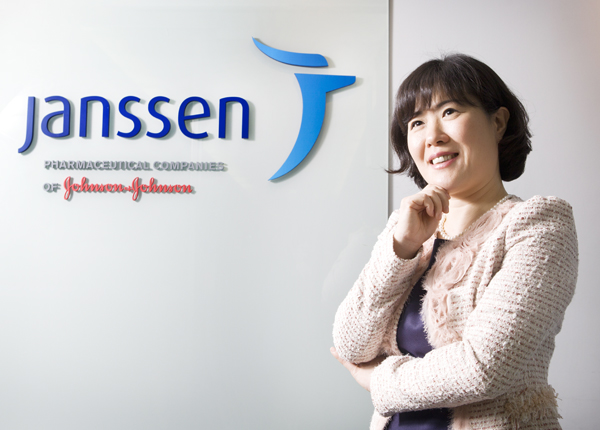 The first impression one has of Kim Oak-yeon, managing director of Janssen Korea, may be that she is quiet, gentle and soft-hearted. But sit down with her for as little as 5 minutes, and there’s much more to her than charm. She’s smart and to the point, outgoing and strong. Such attributes are one reason why she is the first female chief in Janssen Korea’s 31-year history.

Janssen Korea is the local unit of Johnson & Johnson’s pharmaceutical subsidiary known for Tylenol and was set up in 1983 as a joint investment with Yuhan Corporation. There are about 480 employees, including 200 at the headquarters in Yongsan District, central Seoul.

“Although I’ve been working at the same company [Janssen Korea] for more than 20 years, I was given many different roles,” Kim says. “I was sent to Belgium and also worked in Malaysia and China, so it feels as if I’ve been with many different companies. My biggest asset is that I was able to acquire a global perspective and was exposed to diversity relatively quickly.”

“[Over the years] I’ve learned that the more you accept diversity, the higher the possibility of success and growth.” she says. “I’m trying to practice what I’ve learned.”

Q. It’s been almost two years since you became Janssen Korea’s first female chief executive. What business areas have been your focus?

A. I tried to enhance the innovativeness of our portfolio. We have a relatively large portion of products whose patents are nearing expiration and generics being released into the market. In such a case, [a company] could be affected by price cutting or deterioration in market share. This is the reason why I started focusing on creating a healthy portfolio by concentrating on new products and products with high growth potential. I also tried to create a corporate culture and increase participation by executives and employees. I wanted to maintain a sense of Janssen Korea’s winning spirit and creativity, which I think are assets that we have, while at the same time improve the culture of openness. If there is one area I would like to focus more on in the future, that would be human resource development. Quite a number of employees , including my self, are sent to work overseas. I’m making multilateral efforts to nurture more globally talented employees. 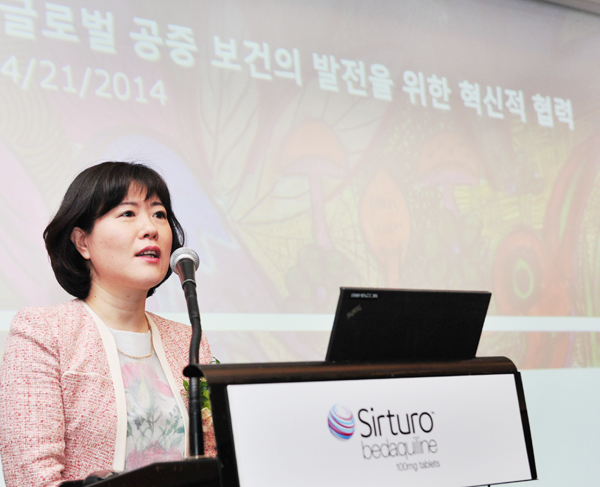 Kim Oak-yeon presents Sirturo, a treatment for multidrug-resistant tuberculosis that has been approved by the Ministry of Food and Drug Safety last month at a release event in Samseong-dong, southern Seoul.Provided by the company

Are there any differences in the character of talented employees in Korea and globally competent employees?

Based on my experience, Korean employees are outstanding. In particular, they are superb when it comes to expressing creativity and having the ability to push forward an idea. But the difference I find with globally competent employees is systemizing creative ideas and practices. In other words, it’s important to deliver your own ideas to other people in a persuasive manner, give inspiration and create a sense of consensus. For this reason, I think many talented individuals in Korea have been somewhat underestimated, as there is a difference in their story-telling ability.

Are there training programs to improve their story-telling ability?

There are several programs. But I would say the most representative one would be the Action Learning Program where young talented employees from North Asia [Korea, Taiwan and Hong Kong] meet, receive several weeks of training and apply in practice what they have learned by coming up with a detailed [business] proposal. They also are required to present their ideas to executives in the North Asia region.

What contributions have been made by Janssen Korea to bring progress to the local pharmaceutical industry?

It’s considered very rare for a multinational pharmaceutical company, but we have two manufacturing facilities in Korea - the Hyangnam Plant [in Hwaseong, Gyeonggi, which was set up in 1983] and Johnson & Johnson’s pharmaceutical unit’s vaccine plant called Crucell. [Johnson & Johnson acquired Crucell in 2011.] The vaccine plant is focused on exports - more than 95 percent of total production volume goes abroad. Also, about 40 products manufactured at Janssen Korea’s Hyangnam plant are being exported to eight countries in Asia. This allows us to contribute to boosting employment and production investment. As a multinational pharmaceutical company, our big role is also to contribute to improving the overall medical quality and outcomes by carrying out research on innovative products in the clinical research phase. The government has announced the Pharma Korea 2020 Vision to nurture Korea’s pharmaceutical industry and is studying institutional strategies, such as boosting R&D and luring overseas investment. This matches well with Johnson & Johnson’s open innovation strategy. This year, Janssen Innovation Center will open in Shanghai, the first in Asia, following others in London, Boston and San Diego.

Why is it in China, not Korea?

We should consider China’s growth potential and the role it will have in the future in the global health and medical treatment industry. The Shanghai Innovation Center hasn’t opened officially and is in the preparation stage, but the official that has been named as the center’s chief is very much interested in the Korean market. The official has continuously expressed his interest in visiting several R&D centers in Korea and is expected to attend an open innovation forum in November. There’s huge possibility of working together [with the center]. (Separately, after the interview, Janssen Chairman Joaquin Duato visited town to sign an agreement with the Ministry of Health and Welfare investing $80 million over the next five years in pharmaceutical research and development as well as academic exchange).

Janssen Korea’s investment in corporate social responsibility has increased significantly. What are some major CSR activities?

There would be no big meaning in CSR when activities only involve helping others just one time or by simply donating money. The principle of Janssen Korea’s CSR is to promote activities that give practical and continuous help to isolated people. As an example, we have been carrying out the Paul Janssen scholarship program for a very long time. This activity is to provide scholarships to excellent students with family members that have mental illnesses. Not only that, but we connect them with university mentors and allow them to meet regularly and continuously to help students grow physically and mentally. Our employees also deliver them handwritten letters and presents so that they are able to receive psychological support as well and feel that they are not alone.

There have been many issues in the local pharmaceutical industry in recent years that have challenged pharmaceutical companies in Korea. Particularly for Janssen Korea, it faced difficulty last year in regard to the manufacturing process of Tylenol syrup products for children. How are you overcoming that difficulty?

Last year’s recall of Children’s Tylenol Suspension was made after we internally found a flaw in the manufacturing process. Based on our credo, regardless of thinking what impact it will have on the actual market but believing that there could be danger, we voluntarily re-collected them. We acted fast with responsibility. At the same time we consulted with the Ministry of Food and Drug Safety and managed parts that needed improvement. Our efforts have been acknowledged by the government and we were able to resume sales. This incident has allowed employees to learn that quality [control] is not only the responsibility of just one particular employee in charge of quality management or those working in the factory production line, but is a big responsibility that should involve all employees. We have expanded factory facilities and increased the work force as part of our efforts to sell high-quality products.

What is your outlook on the future of Korea’s pharmaceutical industry?

For Korea’s pharmaceutical industry to grow, the foremost task will be globalizing local drug companies. And for them to globalize, it’s necessary to increase the overall size of the pharmaceutical industry by concentrating [on what’s important]. Currently, many local companies are scattered [with businesses overlapping]. It’s a good thing when I read examples of local pharmaceutical companies developing new drugs and exporting them. There should be more of these examples. At the moment, there are many incrementally modified drugs, but if there are more new drugs, then the innovation of the Korean market will be recognized globally and investment will increase. This would create an environment for open innovation. Local companies, from a long-term perspective, should also make R&D investments, and the government policies should support them. I wish policy makers would have a more long-term perspective. As for Japan, there are many global pharmaceutical companies. This is a result of the government’s strategic investment and the government acknowledging innovation, which guarantees them long patent periods and high prices. Companies then would generously invest, which would allow innovative drugs to come out of Japan overall. They then become global companies. It’s a virtuous cycle. 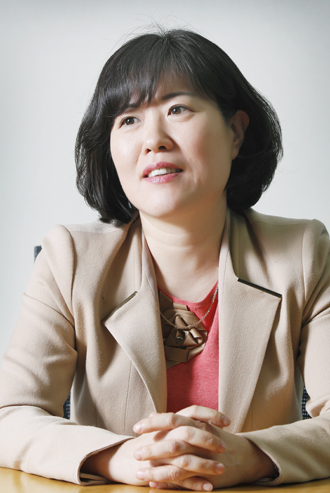