Back from New York, Silla hall is updated

Back from New York, Silla hall is updated 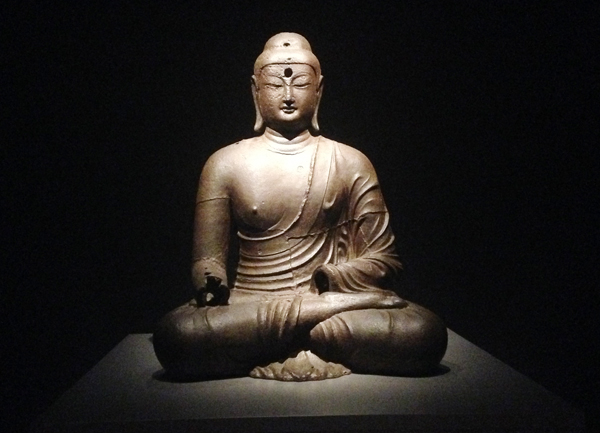 A cast iron Buddha is shown at the National Museum of Korea after being featured at the “Silla Exhibition” in New York. Provided by the museum

Because people can’t travel back to ancient times, museums are places to visit to deduce whether what’s written in the history books really happened.

To provide an opportunity to reinterpret local history, the National Museum of Korea has altered the exhibition theme for the Silla room, located in the Prehistory and Ancient History department.

The changes to the section came after the Silla Dynasty (57 B.C.-A.D. 935) exhibition at the Metropolitan Museum of Art in New York ended in February.

Previously, the area was divided into many different themes, but the museum has simplified them to give visitors the big picture.

“This time, we divided the hall into two large themes,” said Kim Dae-hwan, a curator for the Archaeology and History Department at the museum. “Which either means central versus regional, or royals versus aristocrats.”

The first part of the exhibition largely shows how Silla strived to make the Korean Peninsula a Buddhist country. For royals, respecting and spreading Buddhist teachings was not only a way to strengthen morale among residents, descendants of Goguryeo and Baekje, which Silla unified in the late seventh century, but also to make the royal powers stronger.

“It was important at the time to set the regime’s authority [kept] upright,” said Kim.

One larger-than-life Buddha made of cast iron, which was raved about by the Silla show’s visitors in New York, has become the most notable item in the newly curated exhibition room.

This particular Buddha is now more accessible to locals as it has been moved from the museum’s sixth floor to the first floor. It also has its own alcove with personalized lighting.

The piece, from Bowon Temple in Seosan, South Chungcheong, is estimated to have been made in the late eighth or early ninth century.

“It is rare to have such a large-size Buddha made of cast iron within northeastern Asian countries, so visitors in New York seem to appreciate seeing it in person,” Kim said. “Also, many seem to like it as it looks similar to the Buddha in Seokguram Grotto [in Gyeongju, North Gyeongsang].”

Towards the end of the exhibition, artifacts likely to have been used by regional aristocrats are shown. Porcelain or celadon plate, pots and cups used to make tea are on display, along with fancy accessories such as a set of stirrups for horse-riding covered in delicate equestrian patterns.

The Silla room is part of the permanent exhibition in the Prehistory and Ancient History section at the National Museum of Korea.

The museum is open at 9 a.m. Tuesdays through Sundays; until 6 p.m. on Tuesdays, Thursdays and Fridays; until 9 p.m. on Wednesdays and Saturdays; and until 7 p.m. on Sundays and during holidays. Admission is free. For more information, call (02) 2077-9000, or go to www.museum.go.kr.