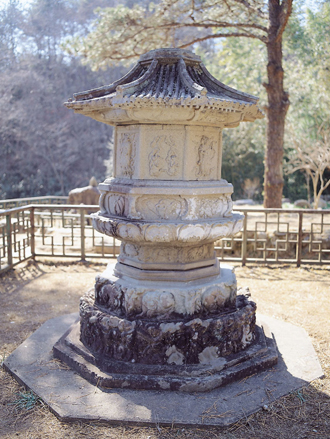 At the age of 28, Master Cheolgam went to China and studied Buddhism. He returned to Silla and eventually continued his Zen practice at Pungaksan Mountain in Hwasun, South Jeolla.

Enchanted with the beautiful scenery of the area, Master Cheolgam built Ssangbong Temple, after his pen name. Upon his death in 868, the king awarded the monk the posthumous name of Cheolgamseonsa and ordered a stupa and stele to be erected at the temple for him.

The octagonal stupa, with its heavily decorated upper and lower bases, is in relatively good condition. Eight lions are carved around the lower base, while the upper part has lotus flowers and a Kalavinka - a creature that appears in Buddhist texts - playing a musical instrument carved on both its lower and upper portions.

This stupa is deemed the most outstanding example of Silla stupas, especially in terms of its sculpturing.