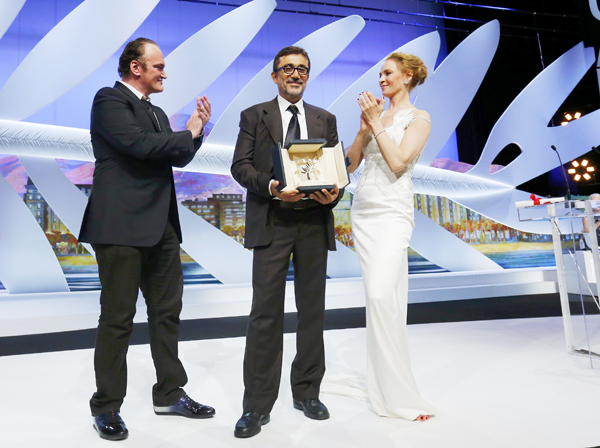 CANNES France - The Turkish film “Winter Sleep,” which examines the huge divide between rich and poor and the powerful and powerless in Turkey, won the Palme d’Or award for best film for director Nuri Bilge Ceylan on Saturday at the 67th Cannes International Film Festival.

Ceylan’s three-hour-plus dark and atmospheric film was only the second Turkish movie to win the top award at the world’s most prestigious film festival, and the director noted that it came on the 100th anniversary year of Turkish film.

He dedicated the honor to “those who lost their lives during the last year,” adding that he was referring to the youth of his country and to unrest in Turkey.

“These young people actually taught us a lot of things. Some of them sacrificed their lives in a way for us,” Ceylan said at a news conference.

“Le Meraviglie” (The Wonders) by Italian director Alice Rohrwacher took the second-place prize for a coming-of-age story set in the Tuscan countryside as a family tries to eke out a bohemian life making honey.

An emotional Dolan said he thought the jury may have paired him with Godard, an inventor of the “New Wave” film, “because of our respective searches for freedom in cinema”.

Spall, best known to cinema audiences as Peter Pettigrew in the “Harry Potter” films, said he felt proud to win the award.

Hollywood Reporter critic Stuart Kemp told Reuters there were “no surprises with the awards going to predictable places”.

Critics had applauded “Winter Sleep” as one of the standout films in a festival that was somewhat short on fireworks, with the French newspaper Le Monde calling it “magnificent.”

Variety critic Justin Chang called it a “sprawling, character-rich portrait of a self-absorbed Anatolian hotelier and his uneasy relationships with those around him.”

The only other Turkish film to win the Palme was Yilmaz Guney and Serif Goren’s “The Way” (1982).

Jury head Jane Campion said she had been daunted by the running length of three hours and 16 minutes but said “it had such a beautiful rhythm ... I could have stayed there a couple more hours.

“The real gift of this film is how honest it is,” she said.

Campion, the only woman to have won the Palme d’Or, said it had not mattered to her or the jury whether a man or woman won.

“It never entered our discussions the gender of the filmmaker that won,” Campion said. “These films were on equal basis with each other. We didn’t go, ‘Oh my God, was this made by a woman or a man?’ We were moved and responded to the film.”

Despite its setting in the vast Anatolian steppe, the film’s atmosphere is almost claustrophobic as it shows a rich man and former actor named Aydin (Haluk Bilginer) who uses his intellect and position to bully his tenants and beat his wife and sister into intellectual submission.

Ceylan was peppered with questions during the festival about a recent coal mine disaster in Turkey, and about unrest and whether his film was trying to explore these themes.

He said current events were important for him, but what his films really were about was human nature.

“I can find enough motivation only if I make movies about the human nature,” he said. “My motivation and starting point is to try to understand the dark side of my soul and that means human nature as well.”

British film critic Richard Mowe, who served on the Cannes Directors Jury, said the centenary of Turkish film might have been a consideration in the award to Ceylan, but he doubted that the Palme d’Or would boost its commercial potential.

“It’s a hard film to get into cinemas because you can’t even describe what it’s about in an easy way - it’s all very metaphysical and metaphorical,” Mowe said.