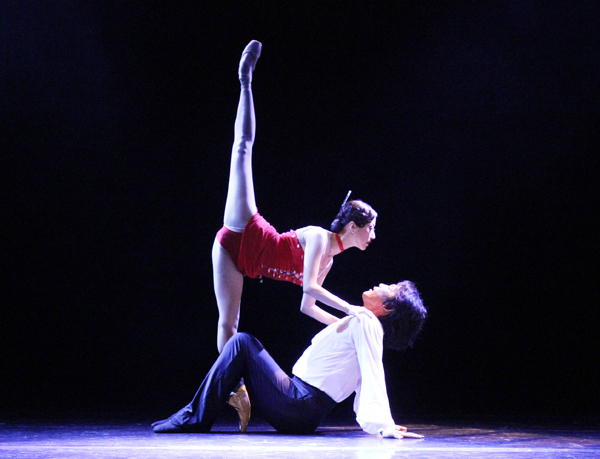 The Choi So Bin Ballet will perform “Lady in Red” at 8 p.m. Thursday.Provided by Seoul Arts Center

Ballet is not all about elegant dancers, tutus and pointe shoes. It’s also about costumes and dancing barefoot, as evidenced by the wide range of modern performances by some of the nation’s leading choreographers at this year’s fourth annual Ballet Festival Korea.

In the past, the festival has included at least a couple of classical performances by the country’s two major companies, the Korea National Ballet and the Universal Ballet. But this year, Kim In-sook, head of the festival organizing committee, was confident enough with the level of work that she programmed the festival entirely with modern ballet performances from the country’s best choreographers and up-and-coming companies.

“Celebrating our fourth year, we are witnessing an increasing number of entries [for the festival] from choreographers who have elevated the level of their work,” said Kim during a press conference last week.

However, she added that “despite the country turning out excellent international-level dancers, it’s a pity we have a relatively poor record when it comes to producing quality choreographers.”

Kim hopes that this year’s festival will “inspire Korean choreographers, while acting as a platform where they can demonstrate their creative power to large audiences.”

That’s why Kim, who is leading the festival for the second year, invited the Kim Yong Gul Dance Theater to open this year’s festival. The dance theater won the award for best performance at last year’s festival.

Dancer and choreographer Kim Yong-gul was the first male Korean to join the Paris Opera Ballet and one of the few dancers to make a smooth transition from being a star on the stage to a successful choreographer.

Kim’s team opened the festival on Friday with “Work 2 S.”

The three-week festival will feature modern performances by 16 choreographers and dance companies, as well as free outdoor performances by student troupes from four universities and teenage dancers from high schools.

Among the new names at this year’s event is the Royal Swedish Ballet’s Jeon Eun-seon, who is making her choreographic debut at the festival. She’ll perform her first creation, “Wall.”

“I wanted to express the barriers people feel in life,” said Jeon, whose performance will be staged at 8 p.m. June 10-11 at Jayu Theater.

There also are performances that are twists on classical works. “Flowers of Scotland” by the Lee Won Guk Ballet is based on Shakespeare’s “Macbeth.” The Choi So Bin Ballet will present “Lady in Red,” inspired by Georges Bizet’s opera “Carmen,” which also will be reinterpreted by the Shin Mu Seop Dance Theater.

Park Jae-hong, a choreographer at Central Ballet, said Ballet Festival Korea is a “great opportunity for local choreographers, as it provides a platform for them to share their creative work with large audiences and at the same time expose them to the charms of modern ballet.”

However, James Jeon, a choreographer at Seoul Ballet Theater, said if the country is serious about fostering choreographers, it needs to do more than hold a festival once a year.

“The country has realized the importance of nurturing choreographers for a while,” said Jeon. “But just emphasizing it won’t do anything. Choreographers need to be affiliated with dance companies and develop together with dance troupes.”

However, Jeon sees a lack of such opportunities for Korean choreographers in Korea. He went on to say that it was companies like the Stuttgart Ballet that allowed John Cranko to become a legendary choreographer, or the Monte Carlo Ballet that did the same for Jean-Christophe Maillot.