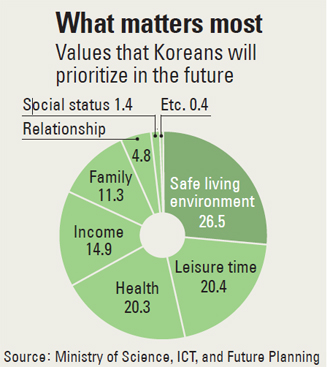 Koreans named safety as their number one priority in the future, a survey showed yesterday, reflecting the continuing psychological aftershocks from the tragic ferry sinking that killed nearly 250 high school students last month.

The survey, commissioned by the Ministry of Science, ICT and Future Planning, was conducted for six days beginning April 18, two days after the Sewol capsized while carrying 476 people. The sinking, in which 288 are confirmed dead and 16 still missing, is on track to become the country’s worst maritime accident. A ferry sinking in 1993 in the Yellow Sea claimed the lives of 292. Media Research, a local research agency, conducted the survey of 1,000 young Koreans across the country.

People were asked what values they will prioritize in the future and 26.5 percent chose a safe living environment. Leisure time was the second most important value with 20.4 percent of respondents picking it as their top priority. Health followed at 20.3 percent.

But when asked what the government’s priorities should be in the future, Koreans displayed more global perspective. The largest number named, 31.5 percent, picked global warming as the No. 1 future policy for the Korean government, while 15.8 percent named shortages of food, water or other resources. 20.1 percent picked social polarization while 11.5 percent chose problems associated with an ageing society.

The people surveyed were aged 16 to 39 and two thirds of them perceived the future as anywhere from five to 25 years from now.

Nearly 93 percent of the respondents said it is likely that scarcity of energy and deepening environmental problems will lead to major international conflicts, but only half, or 53.6 percent, said science and technology will offer a solution to those conflicts.

The survey also looked at how tolerant Koreans are toward specific scientific technologies to be developed in the future. Of those surveyed, 87.6 percent said they were willing to accept gene manipulation for medical breakthroughs, while three out of four people said they wouldn’t mind robot doctors treating them. But six in 10 were negative about drug-induced human intelligence enhancement.

About three in 10 of the people surveyed said they are open to the idea of marrying a robot.