Koreans are beginning to take earlier summer vacations than in the past as they try to avoid crowded destinations in the peak season, and low-cost carriers (LCCs) are eager to benefit from the trend.

Generally, the summer vacation period in Korea starts from the end of July and lasts through mid-August, but recent data shows that more people are taking their summer vacations in June.

According to the Jeju Special Self-Governing Provincial Tourism Association, the number of domestic tourists visiting Jeju in June grew an average of 16.2 percent per year from 2009 to 2013. Last year, 950,000 Koreans visited Jeju Island.

August is still the most popular month for visits to Jeju, with 1.17 million Koreans going to the southern island during that period last year. But the growth of visitors to Jeju in August averaged 12.1 percent in the last five years. The number of domestic air passengers to Jeju in June grew 10.3 percent in the last five years, while in August, it has grown 5.7 percent.

And the trend doesn’t seem to be limited to domestic travel. According to the Korea Tourism Organization (KTO), travel to overseas destinations in August grew 9 percent on average in the last five years, but June saw 12.3 percent growth and July had 9.2 percent growth during the same period. 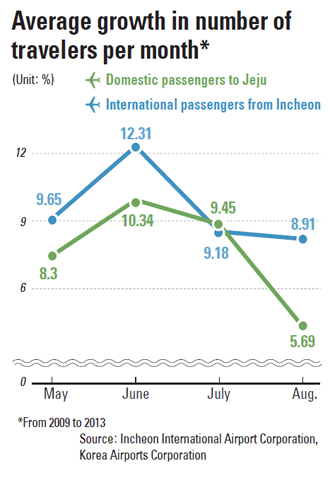 Data from the Incheon International Airport Corporation also showed that travelers through its airport in June increased 13.7 percent on average in the last five years, while growth in August averaged only 7.8 percent.

Industry insiders said that one of the reasons for the popularity of early summer vacations is the expansion of LCCs, which allow people to travel for cheap.

“After LCCs became popular, it seems to have dispersed summer vacations, which previously were saturated in only a certain time period,” a spokesman for Jeju Air said. “This trend is happening especially among young people who want to avoid crowded vacation destinations and pay less compared to the peak season.”

LCCs are now offering promotions for June travelers. Jeju Air will give a 70 percent discount on one-way tickets for flights from June 1 to 15, while Jin Air said it is letting passengers test drive a Korando Turismo in Jeju if they are flying between June 9 and July 20 in cooperation with Ssangyong Motor.

Local LCCs are hoping to grow rapidly this year as Koreans’ overseas travel preferences change. In April, 493,693 passengers flew internationally on an LCC, up 42.8 percent from a year ago.

According to a recent survey from the KTO, Koreans picked France, Australia and the United States as their top three ideal travel destinations this year, but considering costs and schedule difficulties, they said Hong Kong, Macau, Thailand, Guam or Saipan would be more realistic summer destinations.

Korean LCCs have been increasing flights to popular vacation destinations. For instance, Jeju Air, the nation’s largest LCC, said that it will increase its flights to Hong Kong and Thailand from seven per week to 12 per week.

However, industry insiders say that Korean LCCs should be prepared as foreign budget carriers are also entering the same market.