Kakao and Daum decide to merge

Kakao and Daum decide to merge 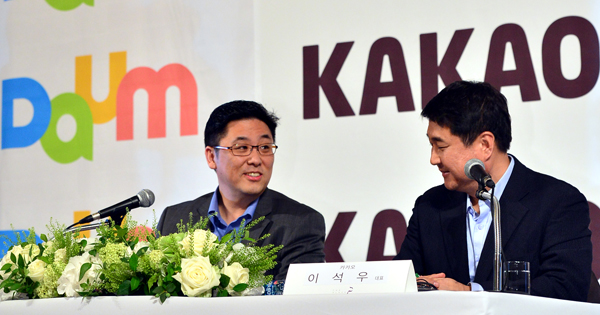 Kakao CEO Lee Seok-woo, right, and Choi Se-hoon, Daum Communications chief executive officer, at a press conference in central Seoul yesterday, where they announced a plan to merge the two companies to create an IT giant with a 3.4 trillion won (3.3 billion dollars) market capitalization. [NEWSIS]

The nation’s No. 1 mobile messenger provider Kakao Corporation and the No. 2 portal company Daum Communications announced a merger that will create a new IT giant with 3.4 trillion won ($3.3 billion) in market capitalization.

The two companies will be merged into Daum Kakao through an equity swap, representatives of the companies said at a press conference yesterday.

The merged corporation will be managed by co-heads from Kakao and Daum. Choi Se-hoon, Daum Communications’ CEO, will likely be the leader from Daum, while Kakao has yet to name its representative.

“Both companies’ boards of directors consented to the merger and signed an agreement last Friday,” said Lee Seok-woo, Kakao’s CEO, at a press conference held at the Plaza Hotel in Jung District, central Seoul, yesterday.

“We plan to finalize the merger process within this year, after gaining approval through a general shareholders’ meeting in August,” he said.

When the companies merge, Kim will end up with more than five million shares of Daum Kakao to become the largest shareholder.

Kakao was planning to list the company on the Kosdaq on its own in May 2015. The company explained that a “back-door” listing by merging with Daum will create more synergy.

“In order to list the company in the domestic equity market, much time and effort is required,” Lee said. “Instead of waiting until next year, we thought it would be beneficial to create synergy by merging with Daum.”

Neither Lee nor Daum’s Choi disclosed any specifics about new plans for the merged company in terms of management or organization.

“Kakao and Daum have similar services such as Kakao’s mobile messenger KakaoTalk and Daum’s mobile messenger service My People,” Choi said. “However, we have not yet discussed how we will restructure the services. We will gradually discuss the benefits of each company’s services.”

Lee said, “Instead of downsizing the overlapping businesses, we believe there are more businesses that we could create after the merger.”

The merged company is expected to become the second-largest company by market capitalization on the Kosdaq. Celltrion, an Incheon-based biopharmaceutical firm, is currently leading the tech-heavy market with a 5.04 trillion won market cap as of yesterday.

Daum and Kakao said they aim to make the new company No. 1 in terms of market cap.

“The goal of KakaoTalk is not expanding the number of subscribers anymore,” Lee said. “We will put our efforts into creating long-term profits and accomplishing 10 trillion won of annual revenue through the merger.”

The Korea Stock Exchange decided to halt trading of Daum’s shares from 7:23 a.m. yesterday until it confirmed requirements for the back-door listing. Trading is expected to resume today.

The over-the-counter market share of Kakao, which is privately held, is 90,000 won per share, making the market capitalization more than 2 trillion won.