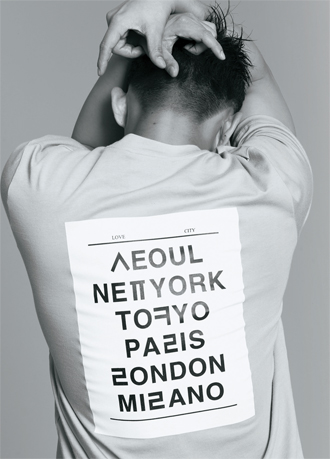 Yoo Ah-in poses in a T-shirt he designed with Nohant. Provided by APR

Hangul, Korea’s national alphabet, is easier to expand globally than the Korean language itself because its letters can be incorporated into the design of products - on T-shirts, plates, bags and even artwork.

And with more people attempting to learn the local language thanks to the rising popularity of K-pop, designers and artists from Korea have begun to take on the challenge of exposing hangul through their creative work.

Maximizing the artistic potential of the Korean alphabet could be considered more effective than advertising how it was put together scientifically, as it draws attention to hangul more easily.

Even celebrities are collaborating with designers to push the Korean alphabet’s momentum by incorporating its letters into everyday items.

Actor Yoo Ah-in, for example, who acted as an aspiring designer in the 2012 TV drama “Fashion King,” has brought his own hangul-themed designs to the style industry.

He worked with the local clothing label Nohant, an up-and-coming brand, to create a T-shirt that lists the names of global fashion capitals, including Paris, New York and London, alongside Seoul, the origin city of the design.

One consonant from each city’s English name is replaced with a letter from the Korean alphabet that has a similar sound, and Yoo Ah-in also modeled the final product.

“As a local fashion label hoping to make it big, we decided we needed something unique and local that can appeal to the global community,” said Brian Lee, CEO of Nohant.

Although it was a challenge finding the right typography to make the Korean alphabet look its best, Lee said getting the design to work was essential for him in order to target international consumers. He needed an eye-catching, fresh look to promote his company’s existence.

“Many who understand the Korean language tend to think that hangul written as part of a design is not chic, so choosing the right font to make it look natural was the most difficult part,” he said.

“We wanted to build up our own identity in the fashion world, and choosing hangul was one way to make ourselves stand out among many other fashion labels out there.”

Lee originally planned to hold a pop-up shop just at the Seoul branches of Hyundai Department Store, but the retailer has asked him to do another round of temporary sales at its regional branch in Daegu, and possibly in Busan. The Nohant T-shirts are also available online.

“Although there seems to be many obstacles to getting recognized in the world as a local fashion house, we hope the release of this T-shirt has shed some light not only on hangul but also on Korean designers,” said Lee.

The Korean alphabet’s importance became more prominent after the government designated Hangul Day, which falls annually on Oct. 9, as a national holiday last year. The attempt to remind Korean citizens of the importance of cherishing their own alphabet has inspired many people to take it to the next level and try to make the characters more recognizable outside of Korea.

To commemorate Hangul Day in 2014, established artists are contributing their talents to promote hangul internationally.

Fashion designer Lie Sang-bong, who earned his name in the world of style with clothing incorporating hangul, will release an artistic book on the Korean alphabet with New York-based installation artist Kang Ik-joong. The publication will be released on Hangul Day and will include stories on how the Korean alphabet was created, alongside art works inspired by the lettering.

“For hangul to have sustainable power, the characters needs to not only be incorporated into designs, but also be familiar in everyday life of people in the world,” said Lie, adding that making the book will make hangul take a leap of versatility in many different industries.

Professor Seo Kyung-duk of Sungshin Women’s University, who has helped to promote Korean food, alcoholic beverages and overall culture to the world, is currently working to develop a channel for the book’s distribution. He is talking to many art museums and galleries in the United States, including the Museum of Modern Art, the Guggenheim Museum in New York and other retail outlets to make it easily available for purchase.

Another way to have non-Korean speakers feel familiar with hangul would be to expose it as much as possible using attractive fonts, experts say, as many will get their first look at the alphabet online through different social network services.

“Developing a font will not only enhance some visual design culture but also contribute in studying the basic structure of the alphabet’s shape,” said Lim Jin-wook, president of Typodesign Lab, which focuses on making the Korean alphabet appealing in the digital world.