Luck on his side, Beckett throws first no-hitter

Luck on his side, Beckett throws first no-hitter 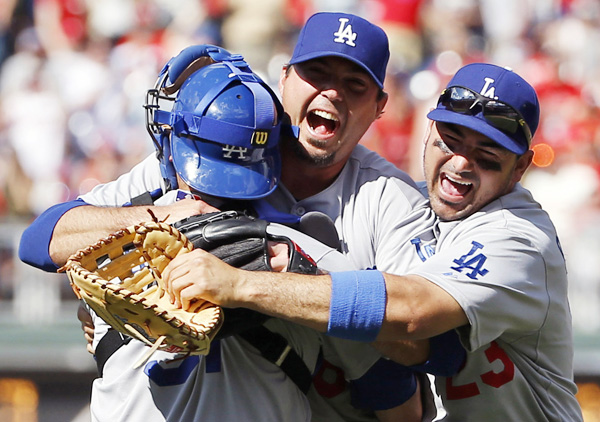 Josh Beckett started talking about throwing a no-hitter in the fourth inning, ignoring traditional superstitions and making his catcher nervous in the process.

The big, folksy Texan had stuff that was too dominant to worry about a jinx.

Beckett pitched the first no-hitter of his stellar career and the first in the majors this season, leading the Los Angeles Dodgers over the Philadelphia Phillies 6-0 on Sunday.

A year ago, Beckett was nearly derailed by a nerve condition that left him unable to feel his fingertips. On this day, he was downright nasty.

“I was joking about it because I was waiting for them to get a hit,” Beckett said. “You don’t think at this point of your career that you’re going to do that. I just don’t feel that my stuff is good enough to do that. I’m probably as hard on myself as anybody.”

Beckett stuck out six, walked three and didn’t come close to allowing a hit against a lineup that included two former National League MVPs and four former All-Stars. Beckett has credentials, too: A three-time All-Star, he also was a World Series MVP.

The 34-year-old right-hander threw 128 pitches. He fanned five-time All-Star Chase Utley on a called strike three to end the game.

“It’s very special. It takes really good defense behind you, a little luck sprinkled in and making pitches when you need to make pitches,” Beckett said. “That’s a good-hitting team you don’t take lightly.”

Beckett mixed a sharp fastball with a slow, deceptive curve that kept hitters off-balance while retiring 23 straight batters at one stretch. He pitched the Dodgers’ first no-hitter since Hideo Nomo beat Colorado at Coors Field in 1996, and the 21st in franchise history. Sandy Koufax threw four.

“I knew he had something special going early,” catcher Drew Butera said. “I was a nervous wreck from the fourth inning on when he said he had never taken one this far. He’s a guy who is going to keep it loose and he didn’t want anybody to be thinking about it.”

Beckett pitched the first no-hitter in the majors since Miami’s Henderson Alvarez did it against Detroit on the final day of the 2013 season.

Beckett also became the first visiting pitcher to throw a no-hitter in Philadelphia since Montreal’s Bill Stoneman stopped the Phillies on April 17, 1969, at Connie Mack Stadium.

All of the defensive plays behind Beckett were routine. Domonic Brown had the hardest out, a liner that left fielder Carl Crawford ran down near the warning track in the fifth.

Beckett sat at the end of the bench, next to a security guard, as the Dodgers batted in the ninth inning, before taking the mound in his bid for history.

“It was awesome. You think about it pretty much from the fourth on. I’m not one of those guys that carried a lot of no-hitters deep into games,” he said.

Beckett’s longest previous bid was 6 2-3 innings before allowing a single to Detroit’s Curtis Granderson on June 3, 2009.

Beckett retired pinch-hitter Tony Gwynn Jr. on a popup to shortstop to start the ninth. Speedy Ben Revere followed with a grounder that first baseman Adrian Gonzalez fielded, and he flipped to Beckett covering the bag for the second out.

Jimmy Rollins was up next, and Beckett walked him on a full-count pitch. That brought up Utley, and when the count when to 3-2, Butera went to the mound to talk to Beckett.

Beckett then threw a 94 mile per hour fastball that Utley looked at, and plate umpire Brian Knight called strike three.

“I knew he wasn’t expecting me to throw a fastball down the middle,” Beckett said.