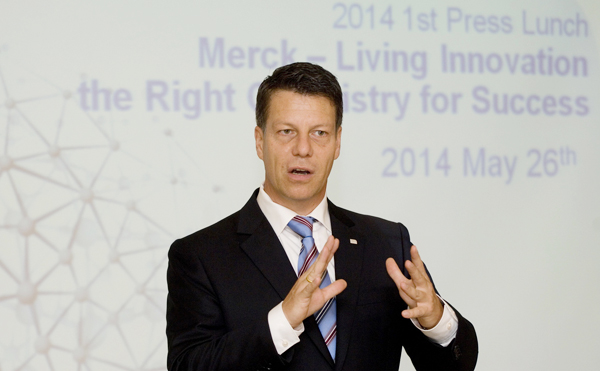 Merck’s recent acquisition of AZ Electronic Materials, a Luxembourg-based chemical materials producer, is expected to increase business opportunities for its Korean unit particularly in the semiconductor industry, according to Michael Grund, managing director of Merck Korea.

“When you look at the size of our work in Korea, Merck has about 420 people and AZ about 140 people,” Grund said, in a press conference held yesterday at the Westin Chosun Hotel in central Seoul. “[As for AZ], it’s not only operations, marketing and sales but also there’s a significant amount of R&D.”

Grund explained that the Korean office of AZ Electronic Materials has two business units: electronics and semiconductors. When all steps of the merger are complete by the end of this year, Grund said, AZ’s semiconductor unit will remain independent within Merck’s performance materials unit, while the electronics side will be merged with Merck Korea’s liquid crystals unit.

“AZ is globally based but has a strong Asian footprint,” Grund said. “It has an R&D center in Japan and also big operations in R&D in Korea and Taiwan.”

From a global perspective, Grund said Merck will be adding new customers with the merger, especially in the semiconductor industry, specifically previous customers of AZ Electronic Materials.

In the display sector, Merck is a materials provider to companies like Samsung Electronics and LG Electronics, while in the semiconductor sector its main customers are Samsung and SK Hynix. According to Merck Korea, materials produced by AZ are used in integrated circuits and devices, flat-panel displays and light-emitting diodes.

The press conference came after Merck, a leading pharmaceutical and chemical company based in Germany, announced earlier this month that it has completed its acquisition of AZ Electronic Materials, after it made a recommended cash offer last December of 1.9 billion euros ($2.5 billion). Merck last year generated revenues of 11.1 billion euros with its four divisions, including consumer health and performance materials.

“With AZ, not only will Merck be able to further expand its presence in the important Asian growth market, but it will also be able to raise exposure to exciting global megatrends in electronics materials - from smartphones to the most advanced computing devices,” Grund said. “As the acquisition is completed, Merck expects all major steps of the integration to be completed by the end of 2014.”

He added that he expects double-digit growth in sales and revenues globally with the acquisition of AZ Electronic Materials.