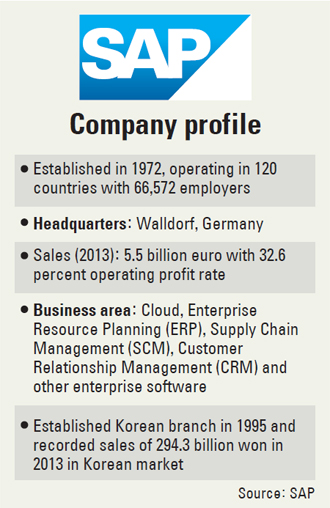 The world’s third-largest software manufacturer SAP yesterday signed a memorandum of understanding to collaborate with the Gyeonggi provincial government and Dankook University to help produce more creative professionals and skilled data analysts by building a Big Data department at the school.

The company signed the agreement at its headquarters in Germany yesterday with Chang Ho-sung, president of Dankook University, and high-level officials from the Gyeonggi government, to establish a data research institute at Pangyo Techno Valley and a separate program at Dankook.

Dankook University in Yongin, Gyeonggi, is planning to start a Big Data studies program in its effort to encourage more Koreans to become data analysts. To help start the institute, SAP Korea will provide the school with technical assistance, including its database and analytics program, Hana Platform.

The university said it plans to launch the program as early as 2015, and the software giant has said it will hire many of the graduates at SAP branches in Korea and 120 other locations. Students enrolled in the program will be able to intern for the company.

It will make SAP one of just a few international companies that is directly collaborating with a Korean university to raise talent that it can later hire.

Bang Sung-il, a professor of Dankook University’s School of Electronics and Electrical Engineering, said the school has not decided yet if the Big Data studies major will be for undergraduates or graduates, but it will begin recruiting students as early as next year. The university said it is considering funding half of the students’ tuition.

“Korea displays a high growth potential in the Big Data market in the Asia-Pacific,” said an official from SAP Korea. “We came to join with the university and Gyeonggi provincial government in a bid to assist raising young Korean engineers to become global talents.”

As part of the MoU, SAP Korea will open a branch of Stanford University’s Institute of Design in Pangyo Techno Valley in Seongnam, Gyeonggi.

“Design thinking” is a new form of interdisciplinary study at Stanford and is a combination of business administration, medical studies, engineering, humanities and sociology to encourage start-ups. The institute was established by Hasso Plattner, the co-founder of SAP.

Among other creations, the institute has produced a pouch-shaped baby sleeping bag that has saved the lives of 22,000 newborns in developing countries by preventing them from getting hypothermia.

The effort to open a branch of the institute in Pangyo Techno Valley was led by Gyeonggi Governor Kim Moon-soo.

“We hope to contribute to revitalizing the start-up boom in Korea, which is now stagnant, whereas Silicon Valley is flourishing with new start-ups with innovative technologies and ideas,” said a public relations manager at SAP Korea. “The newly founded institute is the result of a mutual agreement between the Gyeonggi governor and our management members who were seeking innovative partners.”