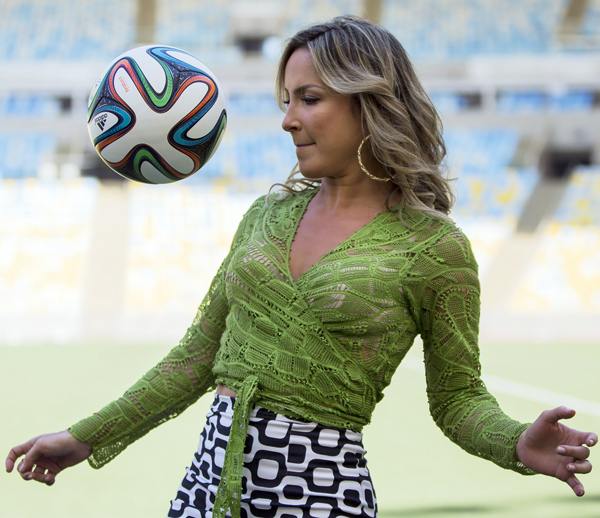 In this Jan. 23, 2014, file photo, Brazilian singer Claudia Leitte plays with a soccer ball as she poses for photos at the Maracana stadium in Rio de Janeiro, Brazil. Leitte will perform with Jennifer Lopez and rapper Pitbull the official song for the 2014 World Cup. [AP/NEWSIS]

SANTIAGO, Chile - The official World Cup song is definitely striking a chord - the wrong one with many in host country Brazil.

Since the recent release of FIFA’s “We Are One (Ole Ola),” hordes of fans in Brazil have been slamming the official 2014 Cup theme. Many expressed their frustration on Twitter under the tag #VoltaWakaWaka - a plea for the return of the widely loved song that Colombian artist Shakira performed for the 2010 tournament in South Africa.

Although Brazilian Claudia Leitte is also featured in the official theme, critics say they don’t understand why Cuban-American rapper Pitbull and Bronx-born Puerto Rican singer Jennifer Lopez were chosen for the song when there are so many other great musicians in the land of Bossa Nova.

They also complain that the song is mostly in English and Spanish, leaving only a few seconds at the end for Leitte to sing in her native Portuguese.

“What I don’t like about the music is that it’s a poor, dull, generic pop theme,” said Gaia Passarelli, a Brazilian music journalist and a former VJ for MTV Brazil. “It’s a shame considering Brazil’s rich musical tradition, which is admired all over the world.”

“In the end, we lost a chance to do something rich, inspiring and cool. I’m feeling ‘saudades’ for Shakira,” Passarelli said, using a Portuguese word that roughly translates as painful longing.

Shakira does have a song on FIFA’s official World Cup album, the driving “Dare (La La La).” By Sunday, a video of it featuring Barcelona players such as Argentina’s Lionel Messi and Brazil’s Neymar had been viewed nearly 27 million times on YouTube in the three days since its release. But it’s not the designated official song for the event.

“In my many visits to this country, I’ve heard a lot about the great Brazilian music tradition and it gives me great pleasure to see a Brazilian artist at the heart of this song,” Valcke said after the theme was presented at Rio de Janeiro’s Maracana stadium.

Naming an official FIFA song dates back to the 1966 Cup in England. Since then, fans have hummed to favorites like “Un’estate italiana” by Edoardo Bennato and Gianna Nannini in Italy 1990 and “La Copa de la Vida” by Ricky Martin in France 1998. While Shakira’s catchy “Waka Waka (This Time for Africa)” was popular, Placido Domingo’s “El Mundial” for Spain 1982 was less so.

“The music in other World Cups was also stripped of local color,” said Leonardo Martinelli, a composer and music critic who lives in Sao Paulo.

“Whether it’s in South Africa, Germany or Japan-Korea, the regional musical element was used only as a very light seasoning, just enough to give it a discreet local color,” he said. “In the case of this latest song, the seasoning has its right amount of cliches and stereotypes usual with commercial music.”