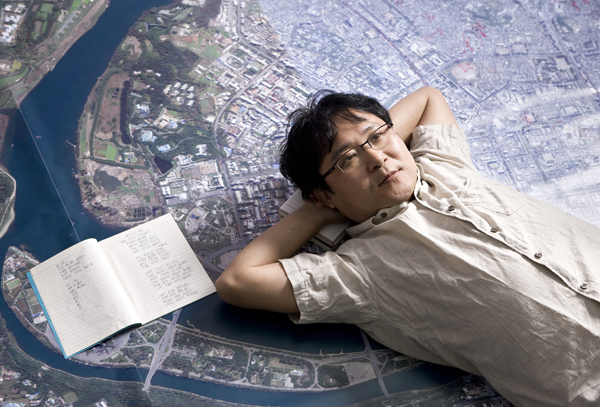 North Korean defector Jang Jin-sung, a poet, lies on a satellite map of Pyongyang in the office of New Focus, an online newspaper on North Korea, in Nonhyeon-dong, southern Seoul. [JoongAng photo]

LONDON - North Korea defector Jang Jin-sung testified earlier this month in front of the British Parliament in London. He made his living in North Korea as a lauded propaganda poet, earning a place as a high-ranking counter-intelligence official in the regime’s elite under late leader Kim Jong-il.

At the event, he spoke in front of some 90 representatives and experts on May 7 in Committee Room 4A in the Houses of Parliament, which was hosted by the All-Party Parliamentary Group on North Korea and organized with the help of the European Alliance for Human Rights in North Korea.

The talk coincided with the release of his new English-language memoir, “Dear Leader: Poet, Spy, Escapee - A Look Inside North Korea,” which reflects upon his experiences growing up under the close watch of the regime before his eventual defection to Seoul in 2004.

As one of the highest profile defectors from North Korea, Jang’s book has gained a significant amount of attention from the international media.

He has been interviewed by international TV broadcasters including NBC, CNN and BBC, and his book has been reviewed in The Times, The Economist, the Financial Times, the Guardian and USA Today.

His collection of poetry was published and translated into English in 2010, and he is perhaps most renowned for his poem entitled, “Selling my Daughter for Only 100 Won,” which shines a light on North Korea’s brutal dictatorship. Also the founder and director of New Focus International, a North Korean news analysis outlet led by North Korean defectors, he is the first to admit, “Through the book, many strange things have happened.”

Q. The attention from the West has been spectacular.

A. The level of response really is different [than when I published a book in South Korea]. Appealing to cultural society is also important. It’s something I felt during the 2012 London Olympics. But the more advanced a nation is in terms of civil rights, the more advanced it is in culture. I wanted to speak and appeal through culture, not politics.

[Jang was the representative for North Korea at the Poetry Parnassus, the largest poetry project in the London 2012 Festival, where poets from all 204 of the nations competing in the Olympic Games were gathered.]

Did you expect this kind of response?

I did not. Random House [the publisher of “Dear Leader”] didn’t either. A copy of the book was sent to each publisher, and they contacted me after they saw the book.

How did you end up publishing an English-language memoir?

Agents contacted me after reading my poetry collection, “I am Selling my Daughter.” I made a contract with one of those agents in 2012. They asked to write a book the following year, so I wrote my memoir. That was contracted to London’s Random House. I heard that 11 U.S. publishers separately bid for rights to the book.

What was your editor’s first reaction after reading the book?

You weren’t very active in promoting your work in South Korea. Through this opportunity, do you feel like your job now is as an author?

Yes. I felt that after all, more than another type of appeal, the appeal of truth and the appeal of people is the most important. The publisher is asking for a second book. That is because a road has opened now.

What kind of work will it be?

I want to write a story with the protagonist as a female defector. Sex is the most instinctual thing and cannot be distorted and should not be distorted. Through this I want to tell of North Korea’s human rights and reality, where the human’s last instinct is distorted.

It’s been 10 years since you came to South Korea.

I’m 10 years old - still a minor. Why 10 years? Because in the world I lived in for 30 years in North Korea, there was no media, no Internet. The life I lived then was that of loyalty to the party and the leader, with only that kind of future. We could not think of anything else. When I came to [South] Korea, I felt that my life expanded and became diversified. I was surprised, but also grateful.