Ahn vows to give away his five-month windfall

Ahn vows to give away his five-month windfall 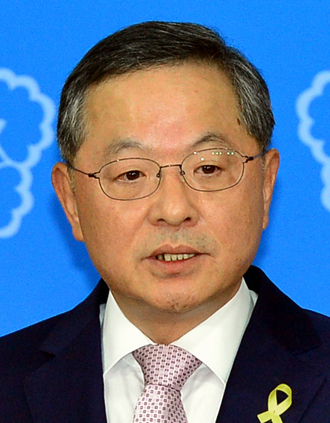 Facing mounting controversy over a fortune amassed in a five-month period after he retired as a justice of the Supreme Court, Prime Minister-designate Ahn Dae-hee vowed to give away all the money he earned over the past year.

“Reflecting on public sentiment, it still seems too much that 1.1 billion won [$1.07 million] was added to my assets over a year during which I practiced as a lawyer,” Ahn said at a hurriedly called press conference yesterday at the Central Government Complex in Gwanghwamun, central Seoul. “Therefore, I decided to donate all of it to society.”

Ahn denied he had done anything wrong or was involved in any conflict of interest by making 1.6 billion won in more than five months from July through the end of last year by working as a private lawyer. Ahn retired as a Supreme Court justice in July 2012.

“I began practicing law last July, which was one year after retiring as a Supreme Court justice,” said Ahn. “I never took a case that breached my ethics or conscience. I strived to represent people in difficulty or those who were falsely accused solely based on the principles of law.”

Sweetheart deals between the private sector and former government servants are under the microscope in the wake of the sinking of the Sewol ferry in April. Collusion between government inspectors and the shipping industry is considered a factor in that tragedy, which led to the death of at least 288 people.

President Park Geun-hye has made grand vows to completely reorganize the government and society to root out the kind of sketchy practices that led to the tragedy. The hiring of former prosecutors and judges like Ahn by law firms after they retire from public service is one of the practices now condemned.

Reports of Ahn’s five-month windfall has thrown mud on his previous image of being upright during his years in public office, during which he earned the nickname “Mr. Clean Hands.”

As head of a special investigation team at the Supreme Prosecutors’ Office during the administration of President Roh Moo-hyun, he got to the bottom of a scandal involving illegal campaign funds amassed by the Grand National Party, the ruling Saenuri Party’s precursor. Ahn also ran an investigation into illegal funds flowing into Roh’s campaign team and arrested An Hee-jung, then a confidant of Roh, who is now seeking gubernatorial re-election in South Chungcheong, for election fraud. Ahn was also known as “The People’s Prosecutor,” which is one of the reasons Park nominated him as prime minister in the wake of the ferry disaster and her vows to clean up Korea.

But with growing questions about his handsome paycheck, public opinion is turning against Ahn and the opposition is ready to grill him at a confirmation hearing.

A preparation team for Ahn’s confirmation reported that of the 1.6 billion won he earned last year, Ahn paid 600 million won in taxes and donated 470 million won to charity. The team said the balance, about 600 million won, was spent purchasing an apartment in Seoul that cost 1.25 billion won.