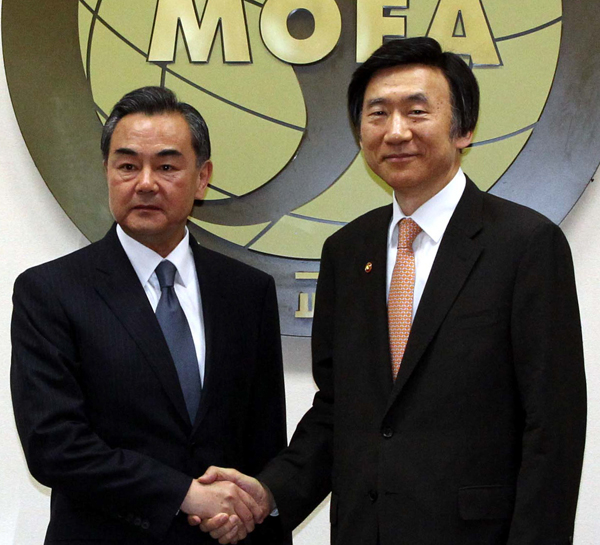 “We are looking at the best period of relations between Korea and China,” Wang said going into talks with Yun yesterday afternoon at the Foreign Ministry in Jongno District, in central Seoul. “This is the result of efforts by our two countries, as well as our nations’ leaders.”

“Especially regarding the high-level exchange this year, [China has] the objective to put together all necessary preparations with Minister [Yun],” he added.

According to the Korean Foreign Ministry, the main issues discussed included preparations for Xi’s visit in June for a summit with President Park Geun-hye and North Korean nuclear issue. The two sides agreed that North Korea’s nuclear activity and actions threatened security and peace in the region and will work towards a condition suitable for meaningful dialogue with Pyongyang which can lead to its denuclearization.

Wang’s two-day trip to Seoul, which runs until today, is his first official visit here since he took office as China’s foreign minister in 2013, and his first visit to the capital city in six years.

“My visit to Korea this time feels like I am visiting a close relative’s house or visiting a close friend, and a visit where we are drawing out a beautiful blueprint together as we discuss cooperation,” Wang said. “Considering the serious change in the international situation, we choose Korea as an even closer cooperative partner. And with Korea, we aim for our two countries’ joint progress and prosperity and the defense of peace on the Korean Peninsula.”

Wang met with President Park afterward at the Blue House, who told him she hopes the two countries “can advance further to make a new Northeast Asia.”

The two countries emphasized that Korea, Chinese and Japanese cooperation is important to advance the situation in Northeast Asia, but there was not enough time to go in detail on discussion about ongoing historical issues and security tension with Japan, said a Korean official.