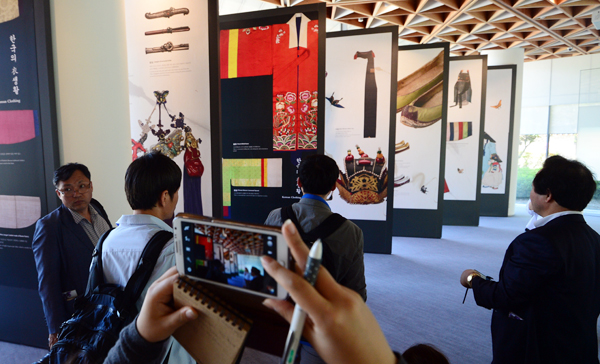 After a two-month renovation, Cheongwadae Sarangchae, a tourist attraction in which tourists can learn about the country’s history, reopens today. The inside of a newly added exhibition hall, above, displays clothing from ancient Korea. [NEWS1]

After a two-month overhaul, Cheongwadae Sarangchae reopened today with more to offer its visitors.

Cheongwadae Sarangchae, located within the vicinity of Cheongwa dae, or the Blue House, is a two-story museum where visitors can learn about the history and historical figures of Korea. Because the museum is the only area within the Blue House complex that is open to outsiders, it has been a top tourist destination in Seoul since 1996.

Last year, 1.1 million people visited Sarangchae, and 800,000 of them were tourists, nearly half of whom were from China.

With the site’s growing popularity, the Korea Tourism Organization took over its management from the Seoul Metropolitan Government in March.

“We wanted to develop Sarangchae into a place where visitors can participate in hands-on activities,” said Oh Hyon-jae, the director of the KTO’s tourism service improvement team.

The most striking difference is the transformation of the first floor.

“Much of the space was left with nothing other than a few chairs, but we added two exhibition halls and the promotion hall,” Oh added.

One newly added exhibition hall, located at the left side of the entrance, consists of large panels that showcase the clothing of ancient Korea: from traditional footwear such as mituri, or hemp shoes, to outfits worn by children during the Joseon Dynasty (1392-1910). The panels are an effective introduction for those who have little knowledge about the history of Korean dress.

A show titled “Wild Flowers of Korea: From Mt. Baekdu to Mt. Halla” is being held at the other exhibition space and runs through Sept. 28.

Various pressed-flower artwork, such as a drawer decorated with wild flowers and detailed drawings, are displayed inside the exhibition hall. In addition, about 150 small pots containing miniature plants and trees native to Korea are on display in Sarangchae’s front yard.

A hansik, or Korean food, promotion hall is also a new addition. Groups of tourists and solo travelers from overseas are able to book a place on the food program, which will begin in mid-June. Attendees can watch a Korean teacher demonstrate cooking local cuisine while eventually enjoying the food that is produced.

Cheongwadae Sarangchae is open from 9 a.m. to 6 p.m. every day except Mondays. Admission is free. For more information, call (02) 723-0300 or visit www.cwdsarangchae.kr.

To get to Cheongwadae Sarangchae, get off at Gyeongbokgung Station, line No. 3, exit 3 or 4. Walk 15 minutes.