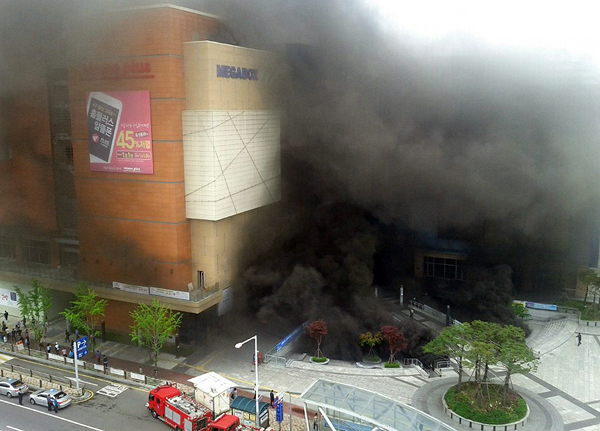 A blaze that broke out at Goyang Bus Terminal, Gyeonggi, generates thick smoke yesterday, chocking the bus terminal and nearby areas. [NEWSIS]

A fire broke out yesterday at a bus terminal in Gyeonggi, killing six people and injuring more than 40.

The blaze started in an underground construction site at Goyang Bus Terminal in Gyeonggi at around 9 a.m., according to the Ilsan Fire Station.

The fire was extinguished only 20 minutes after it was first reported at around 9:02 a.m. But it spread rapidly from the construction area to the upper levels.

Five of the six casualties were found near a ticket office and a toilet on the second floor of the station. One was found in the basement, where the construction was being done.

The fire and how it was handled will be closely scrutinized in the wake of the sinking of the Sewol ferry and the government’s poor response to that tragedy, which led to the death of 288 passengers.

Eyewitnesses and fire fighters said sparks from the construction site’s welding caused the blaze. The sparks appear to have been caught in combustible interior materials, burning through the first basement level and climbing, Seo Eun-seok, chief of the Ilsan Fire Station, said.

Among the injured, five are in critical condition.

The number of the dead was earlier reported to be seven, but one female victim was revived through CPR.

The Ilsan Fire Station warned the Korea JoongAng Daily that the number of dead and seriously injured may change.

“Many of the casualties are hospitalized after inhaling poisonous gases,” said an official of the Ilsan Fire Station.

“It is hard to predict now the specific effects that poisonous gas from the fire will have on people,” the official continued. “When it comes to those five people in critical condition, three of them are at risk of dying.”

CJ Foodville, an affiliate of CJ Group, was scheduled to open a food court in the station in July. The bus terminal complex, which has seven floors above and four underground, also houses a large Homeplus store on the second basement level. Since the store was supposed to open at 9 a.m., not many people were in it, sparing a larger disaster. On floors four to seven is a Megabox, a multiplex of movie theaters.

Since the fire was in the morning, Megabox said that none of their customers were affected. 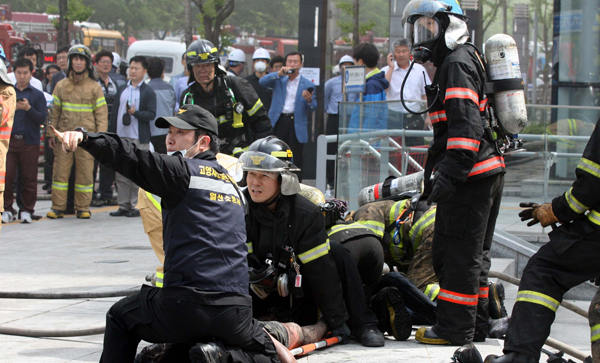 Firefighters try to take an evacuated person to a hospital yesterday after rescuing the victim from the fire that broke out at Goyang Bus Terminal in Gyeonggi. [NEWSIS]

“The fire broke out below the ground, but it quickly found its way to higher floors,” Chief Seo of the fire station said. Many of the injured also were on the second floor.

The six fatalities included a woman in her 50s and two men in their 20s and 50s. More detailed identification of the casualties has yet to be announced.

Baekseok Station on subway line No. 3, which runs through Seoul and the surrounding areas in Gyeonggi, is near the accident site. Subway trains skipped the station from the time of the fire until 10:21 a.m. Korea Railroad Corporation, which jointly oversees line No. 3 with Seoul Metro, said it temporarily ordered trains to skip the stop due to worries about noxious gases.

The Central Disaster and Safety Countermeasures Headquarters, a state-run emergency agency, formed an emergency team to manage the accident aftermath. Authorities focused on whether safety measures functioned at the time of the accident.

“It seems that the sprinklers worked fine and an evacuation order was also issued,” Seo said. “But we are still not sure whether the fire-protecting shutters worked,” he said.

However, some witnesses said an evacuation order was never broadcast in the station. Seo also added that many people were able to be evacuated through gates on the second floor. The gate exists on the floor because it is used as a bus departure area.

“We formed a task force to investigate more specific details about the accident and will look to find who was responsible,” Seo said.

The fire came at a delicate moment in which concerns for safety have been heightened following the sinking of the Sewol last month.

President Park Geun-hye apologized for the government’s poor handling of the tragedy last week and pledged to create a new comprehensive safety agency. Earlier this month, a subway train on line No. 2 rear-ended another train, leaving more than 200 passengers injured. Most of the injuries were not life-threatening, but the accident questioned the government’s determination to keep people safe.

As local elections draw near, candidates of both parties are promising stronger safety measures as their major pledges.