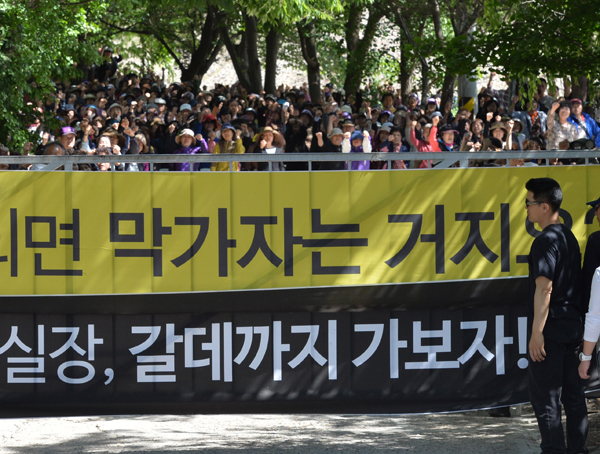 A banner that states, “Let’s go the whole hog, Kim Ki-choon,” can be seen yesterday on Geumsuwon’s main gate in Anseong, Gyeonggi. [NEWSIS]

The Evangelical Baptist Church held a press conference yesterday to announce that Yoo Byung-eun, the religious group’s head and the businessman behind the operator of the sunken Sewol ferry who has evaded arrest, was not at Geumsuwon, the sect’s compound in Anseong, Gyeonggi.

A temporary spokesman for the church, better known as Guwonpa, also made it clear that the sect’s followers would not let the 73-year-old tycoon be arrested by authorities.

The church confirmed earlier yesterday that it had heard a rumor alleging that Yoo had returned to the complex, and added that it would hold a briefing to clarify any speculations.

“Many of us are hoping Yoo will not be arrested,” Lee Tae-jong, the temporary spokesman for the sect said at the conference, which was held at the main gate of the compound. “Even if the entire congregation of 100,000 believers is arrested, we won’t hand him over.”

In the press conference, Lee also disclosed that the prosecution had requested Geumsuwon to take down a banner stating, “Let’s go the whole hog, Kim Ki-choon,” a slight directed at the president’s chief of staff. The prosecution, however, previously denied having requested the group to remove it.

At the conference, the spokesman also played a recording that he insisted were of phone calls with a prosecutor. In it, a person alleged to be a prosecutor asked Geumsuwon to detach the banner and suggested other phrases it could use instead.

The relationship between Kim and the cult dates back to a controversy in 1987 when the bound and gagged bodies of 32 adherents of the sect were found dead, stacked in piles in a factory in Yongin, Gyeonggi, in what appeared to be a mass suicide. At the time, Kim was the justice minister and Yoo was a minister and a leader of the sect.

The Incheon District Prosecutors’ Office said it was not aware of the rumor that Yoo may have returned until media reported it yesterday and subsequently requested the police to strengthen its inspections on vehicles going in and out of the complex.

The prosecution, however, is doubtful that Yoo returned to Geumsuwon, especially given that it is highly unlikely he would be able to make it back to the compound without being spotted by a strengthened net of authorities. It also suspects that Geumsuwon is trying to use the rumor as a diversionary tactic to throw off the prosecution.

Yoo and his eldest son Yoo Dae-gyun, 44, have been known to use disguises, dying their hair or wearing fake beards, hats and glasses.

The authorities believe the suspects are using cars and cell phones under names of the sect’s devotees to avoid being traced.

After discovering that the two suspects have stayed in Suncheon, South Jeolla, a city surrounded by fishing ports and large-scale harbors, authorities fear Yoo and his eldest son may be preparing to flee overseas via ship.

“They will not be able to run for long in Korea because they are overweight and recognizable,” said an official from the prosecution. “We are strengthening security, assuming they will attempt to stow away sooner or later.”