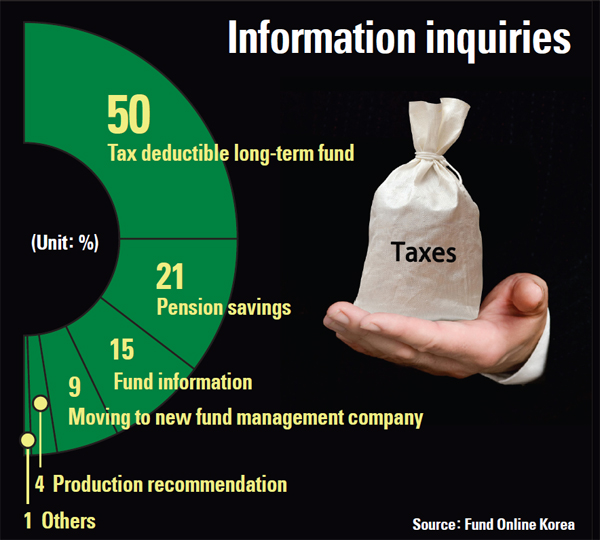 With the main stock market on a roller-coaster ride - spiking to the 2010 level and then falling back to the 1990 level - and bank deposit interest rates remaining low, a housewife in her mid-30s named Ms. Kim has been struggling to find a new investment.

“I’ve been investing since my late 20s, but unlike the mid-2000s before the global crisis where there was a huge investment rush on funds here, in recent years there have not been too many places where I could enjoy a healthy return,” she says.

However, a financial product launched two months ago that she heard about from a neighborhood friend has caught her attention.

The product is a tax-deductible long-term fund. The appeal of the fund is that it is the only financial investment that gives a tax deduction on the investor’s year-end settlement.

So it is a perfect investment for those who want to invest in a product that not only buys into the stock market, but also guarantees a tax deduction.

When it was first launched, it was able to attract only about 1.5 billion won ($1.4 million). But it has grown to total more than 55 billion won with some 57 products managed by about 30 companies. Average profit rates of the products are about 2.5 percent. 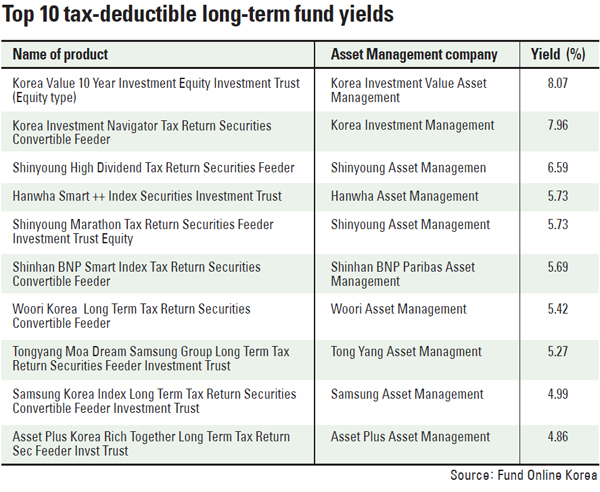 The most popular is the Korea Value 10-Year Investment Equity Investment Trust managed by Korea Investment Value Asset Management, with a yield of 8 percent. The fund manager has attracted investments totaling 1.5 billion won in the tax-deductible fund.

Of course, not all tax deductible funds are profitable. One long-term fund managed by Mirae Asset reports a 0.57 percent loss.

Market experts say that initially, first investors were wary of jumping into the tax-deductible fund because of the mandatory five-year investment term.

However, the product started to grab the interest of investors thanks to the tax benefits, which could turn out to be more lucrative than the yield.

The tax-deductible long-term fund was introduced March 17 after the revised laws passed the National Assembly on Jan. 1.

The aim was to increase the financial investment participation of lower-income households. Only those with an annual salary of less than 50 million won can invest in the financial product.

The government estimates that 83 percent of labor workers will be eligible to invest in the fund.

Even if an investor’s salary increases after subscribing to the product, the same tax deduction is applied up to a maximum annual salary of 80 million won.

The maximum that can be invested is 6 million won a year. When 6 million won is invested, 40 percent, or 2.4 million won, will be eligible for tax deduction. It would be same as getting a tax return of 396,000 won. Basically, just the tax deduction alone would result in an annual profit of 6.6 percent for investors.

Investors can pay the 6 million won annually in a lump sum or make monthly payments.

However, the investment has one potential drawback: the initial investment is not guaranteed. If the stock market plunges and the shares in which the fund is invested lose value, the investor could suffer substantial losses.

The investment also is not subject to the deposit protection law, which requires financial companies to set aside a designated amount in the Korea Deposit Insurance Corporation. In this case, if a financial company goes bankrupt, the original investment or savings of clients will be repaid through the state-run institution.

Market experts advise that when investing in tax-deductible funds, investors should think of them as long-term instruments rather than a source of quick earnings.

Some insiders say the benchmark Kospi could rise further in the future thanks to the global economic recovery that has been centered on advanced economies, as well as improvements in the economic structure in China.

Some say that instead of placing all one’s investments in a single product, it is better to diversify as it is hard to tell where the market will be five years from now.