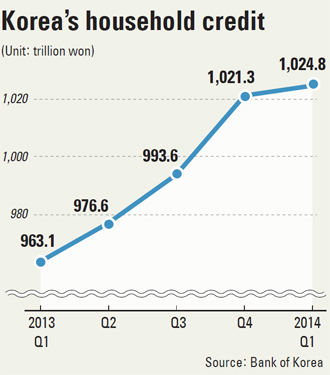 Once again household debt including purchases made on credit has further expanded to reach yet another new high.

According to the Bank of Korea, household debt added 3.5 trillion won ($3.4 billion) in the first three months of this year to reach 1,024.8 trillion won.

At the end of last year, household debt exceeded 1,000 trillion won for the first time, amounting to 1,021.3 trillion won.

Compared to the fourth quarter of last year, the growth of household debt and loans significantly slowed. During that period, 27.7 trillion won of fresh loans and credit purchases were made.

The central bank cited seasonal factors such as year-end bonuses and a decrease in the number of relocations by residents as the main reasons for the slower growth of debt in the first quarter.

Although the debt increased from the end of last year, its growth was sharply slower compared to the last three months of last year.

In the first three months of this year, 100 billion won in new loans was taken out from banks. This is a significant drop from the 8.4 trillion won of fresh loans borrowed from the banking industry in the fourth quarter.

New loans from non-financial institutions eased from 6.7 trillion won in the last three months of last year to 3.2 trillion won from January through March.

Although the pace of growth of household debt seems to have eased, market experts still warn of the risk that it entails on the overall economy.

According to a report by the Korea Institute of Finance, household debt not only exceeds the average of member countries in the Organization for Economic Cooperation and Development (OECD), but it is at a level that could create an economic crisis.

“Based on OECD 2012 statistics, Korea’s household represents 86 percent of nominal GDP, which is higher than the OECD average of 69 percent,” Lee Myong-hwal, senior researcher at the institute, said yesterday during a seminar.

Lee said Korea’s household debt ratio is comparably larger than that of other economic participants, including industry and the government.