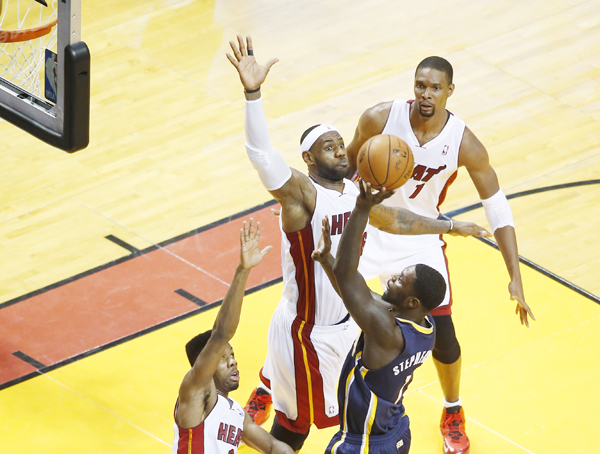 Chris Bosh got them started. LeBron James took over in the second half.

And in the end, the Miami Heat moved to within one win of another Eastern Conference title.

James had 32 points and 10 rebounds, Bosh added 25 points - nearly matching his output from the first three games of the series combined - and the Heat grabbed control of the East finals by topping the Indiana Pacers 102-90 in Game 4 for a 3-1 lead.

Dwyane Wade added 15 points and Miami never trailed, leading by 23 at one point.

“We try to get better every single day, every single game,” James said. “When you do that and go out and play the type of game that you are capable of playing, you can be satisfied with the results. And that’s what we’ve built over the years.”

Only the Celtics and Lakers franchises have been to the NBA Finals in four straight seasons. The Heat now have three chances to join that club, starting with Game 5 at Indiana on Wednesday night.

Paul George scored 23 points and David West added 20 points and 12 rebounds for the Pacers, who got 15 points from George Hill. But Lance Stephenson - who made news in the days between Games 3 and 4 by suggesting he was in James’ head - was held to nine and 7-foot-2 center Roy Hibbert was scoreless in 22 minutes for Indiana.

“I was trying to get into his head,” Stephenson said, referring to James. “I guess he stepped up and got the win. I can take the heat.”

Miami has won three straight games in the series, and going back to the point in Game 3 when the Heat trailed by 15, they have outscored the Pacers by 39 points in a span of about six and a half quarters.

The Pacers won two elimination games in the first round against Atlanta, and need to win three more if their yearlong plan to topple Miami as kings of the East is going to become reality.

The odds are obviously stacked against them. When holding a 3-1 lead, Miami is 8-0 in Game 5 over the past four postseasons.

“We have a chance to play an NBA game on our home floor,” West said. “We are going to try to do something that’s very tough.”

Bosh scored the game’s first eight points, making a pair of 3-pointers and ending a series-long funk. He had scored exactly nine points in each of the first three games of these East finals and was held under 10 points in each of his last seven playoff games against Indiana.

But he came out flying, and probably not coincidentally, the Heat finally had a good start.

“I told him he was going to have a great game,” James said. “We got off to a fast start because of him.”

Miami won the first quarter for the first time in the series, going up 27-19 and helped in part by a late 3-pointer from Shane Battier - with replays showing Vogel moved down the sideline toward the Heat forward as he shot from near the Indiana bench.

Miami outscored Indiana 31-20 in the third quarter and kept pulling away before the Pacers used a 15-3 run to make things rather interesting.

The Pacers were down only 49-44 at halftime - even though Hibbert and Stephenson both had three fouls, the Heat didn’t have a turnover until the second quarter, Miami shot 10 more free throws in the half and Bosh and James combined for 32 points in the first 24 minutes.

If there was any doubt, Miami erased it quickly after halftime. James scored five points in a 7-0 spurt to open the second half, and the Heat were on their way.