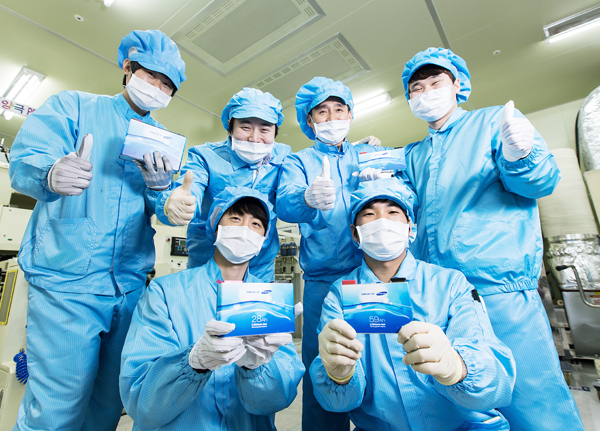 The employees in the Ulsan plant of Samsung SDI pose with car batteries.Provided by the company

Samsung SDI, a battery and display manufacturer, aims to be the biggest producer in the electronic and energy market. Its merger on July 1 with Cheil Industries, a maker of electronic materials, is part of its strategy. The merged company will be called Samsung SDI. The company expects to create synergy with Samsung SDI’s marketing skills and client network and Cheil Industry’s material technology.

According to B3, a Japanese research firm on secondary cells, Samsung SDI takes up 25.8 percent of the global small-size secondary cell market. Although the company was a late starter in the industry with about a 10-year difference, it has been in first place since 2010.

To solidify its position, the company will reinforce its competitiveness by applying the material technology from Cheil to its batteries.

The company is not only successful in producing small-size secondary cells but also other sizes. Global car makers such as BMW, Chrysler and Mahindra signed contracts with the company to use lithium-ion batteries in electric cars. On May 24, BMW revealed the BMW i3, featuring Samsung’s SDI’s 60 ampere battery - the biggest capacity in the world. BMW i8, a high-performance plug-in hybrid car, will also be introduced to the market this year. Because of the vehicle’s popularity, the first-year models are already sold out.

Samsung SDI continues to expand by signing a contract this month with the Shanxi Sheng government and Angyung Hwansin Group to build a battery plant in China. The $600 million five-year investment will be used to make the plant the hub of the electric car industry in China.

Another successful business of the company is its energy storage system (ESS). ESS is a storage system that reserves already generated energy to be used at a desired time. It works as a back-up plan for blackouts as well as an energy conservation method.

To prove the technology of ESS, Samsung SDI participated in smart grid experiment sites in Jeju in 2009 and Daegu in 2010. In 2011, the company signed a contract with Nichicon, a Japanese condenser manufacturer, to provide household ESSs, and again in 2012 with KACO, a German inverter manufacturer. More contracts with companies such as Xtreme Power, Enel, Younicos, Wemag, S&C and UKPN followed and proved the popularity of the company in the global ESS market.

Earlier this month, the ESS manufacturer agreed to provide 1 trillion won ($977 million) worth of household ESSs to Nichicon and reached a 60 percent share, the biggest in the Japanese market.

On the other hand, Cheil’s material business will also benefit from the merger as it will inherit a broader client network and marketing skills from Samsung SDI. Moreover, Samsung SDI plans to expand its synthetic resin business, which was mainly focused on electronics and IT, to the car industry.

“We plan to enlarge our portion in the market with our world-class batteries and energy supply,” said a Samsung SDI official. “In 2020, we will be the world best in the industry with 29 trillion won in sales.”