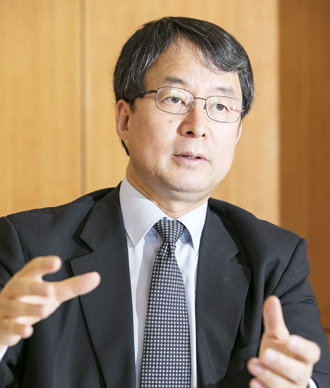 Park Young-jun, a professor at the Korea National Defense University, believes Japan should try to win the trust of its neighboring countries if it wants to exercise its right to collective self-defense.

“Japan’s attempts to change its security policy could result in rapid changes in the security environment of Asia and beyond,” Park said in an interview with the JoongAng Sunday early this month. “Korea will need to come up with proper response measures by closely studying the dynamics between China and Japan.”

There has been heated debate surrounding Japan’s reassessment of its constitutional clause on collective self-defense. Past Japanese governments saw the clause to mean that Japan has the right to take up arms should it wish to, but the administrations did not exercise that right because they interpreted the country’s Constitution as pacifist.

Japanese Prime Minister Shinzo Abe announced his decision to alter the interpretation of the Constitution on May 15. His statement has raised suspicions that Japan may want to change its status from war criminal to a country that can wage war. And although the prime minister dismissed these suggestions, misgivings toward the nation are growing among nearby countries, including Korea, which suffered under past Japanese invasions.

Q. By trying to change the interpretation [of its Constitution], do you think Japan is seeking to change its status?

A. For sure, it will be a crucial change in the country’s security policy. Even though the Japanese government mentioned several preconditions, the fact is that its self-defense forces will be able to exercise military power to a greater extent. But it may be an exaggeration to say that Japan is seeking to become an ordinary country. It still states in the country’s Constitution that it will abandon the use of war and military power for international disputes permanently. We need to closely monitor further decisions by the Japanese cabinet.

Once the Constitution’s interpretation is modified, isn’t there a possibility that the Japanese government will expand the scope of its self-defense forces?

Even so, Japan wouldn’t invade other countries like in the past. We need to look at how the country’s security policies have changed since the inauguration of the Abe administration. Last year, the Abe administration came up with the country’s first-ever national security strategy and a 10-year defense guideline mentioning that it will enhance its defense capabilities, strengthen the Japan-U.S. alliance and cooperate with Asian countries on security. The Abe administration, in addition, picked Korea not as an ally but as the most important country in Asia to cooperate with in terms of security.

What does Japan want by seeking a new security policy?

Germany and Italy, like Japan, were war-criminal countries in World War II, but constraints on military activities in the countries were removed after the war as they joined NATO. The countries dispatched troops to Iraq and Afghanistan and also intervened in the Libya crisis. Japan might want to follow their model. One after another, it wants to get rid of the constraints on its military power.

Aren’t there worries that such a move could ultimately lead to militarism?

It is natural for Korea to have such worries because it was invaded by Japan. But Japan is not going to fight with the United States or the United Nations like it did in the past. The country wants to expand its role amid the changing international security environment. Japan still complies with the rules of not possessing attacking arms and nuclear disarmament. Japan is well aware of the fact that it cannot pursue militarism. Under NATO, neighboring countries could feel uneasy if Germany tried to expand the role of its military, but they wouldn’t think that Germany was going back to Nazism.

In expanding its military role, what is most important for Japan?

Unlike Germany and Italy, Japan has problems related to history with its neighbors. Nearby countries don’t trust Japan because it hasn’t made sincere efforts to solve these problems. France and Poland have accepted Germany and Italy’s expansion of their military roles because they have trust in the two countries. As Abe pointed out, Korea agrees with Japan’s recognition of China and North Korea as threats. But it will be a narrow thought if Japan plans to respond to the threats by building up military power. There are other ways to ease the threats, for example, through multiparty discussions on security. If Japan really regards Korea as a partner on security, it should double its efforts to win Korea’s trust.

Do you think the Abe administration will try to amend the Constitution?

Abe will want to make the amendment. The Liberal Democratic Party already has its first draft. But there are many obstacles and it will take much time to do so. Amending the Constitution might be a long-term task of the administration. Abe’s approval rates may also be a factor. But his popularity is up to the economy. The question is whether Abenomics will succeed or not by fall 2016, when there is an election. So far, the policy has been pretty successful, but what kind of impact an 8 percent increase on consumption tax will have on the market remains to be seen in the latter end of this year. Even if the Japanese prime minister changes, the move to alter the country’s security policy will be maintained in a post-Abe administration.

How will a change in Japan affect Korea?

The Korean government maintains the principle that it cannot accept any factors that affect the security and national interest of the Korean Peninsula. However, the government cannot ignore the fact that Japan’s exercise of collective self-defense forces is aimed at strengthening the country’s ties with the United States. Stronger ties between Japan and the United States are partly helpful for Korea’s ties with the United States and to deter North Korea. In fact, Korea doesn’t have any measures to block Japan from using its collective self-defense forces. It is not a violation of international law. Korea needs to see what advantages it can get from the move and should caution possible side effects. It can make efforts to play a leading role in developing multilateral security relations in the Northeast.

Do other countries support Japan’s move?

The U.S. government has already welcomed Japan’s move to exercise its collective self-defense rights. Vietnam, Singapore and the Philippines, which are in ongoing territorial conflicts with China, also support Japan. Like Germany and Britain in Europe, they hope that Japan will play a similar role in Asia. The U.S. wants a close partnership among its Asian allies. In particular, it wants Korea and Japan to overcome conflicts over distortion of history.