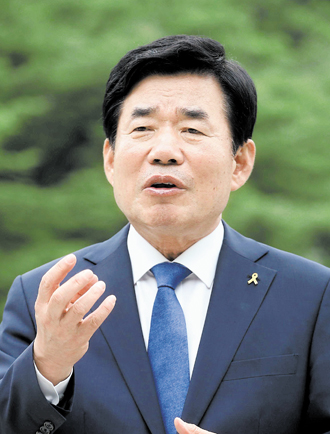 Kim Jin-pyo, the main opposition New Politics Alliance for Democracy’s candidate in the Gyeonggi gubernatorial race, is willing to turn Ansan, the city devastated by the Sewol ferry accident, into a “city of hope.”

“I will persuade the central government so that the Ansan City Government can take care of security, safety and welfare administration on their own just like advanced countries do,” he said in an interview on Sunday with the JoongAng Ilbo.

Kim added, “Taking advantage of my work experience as deputy prime minister for the economy and education, I will be a governor with achievements, not with political activities.”

Q. The approval ratings for you and ruling Saenuri Party candidate Nam Kyung-pil are very close.

A. “People think the Gyeonggi governor seat may not be for a good-looking politician. Nam has worked as a lawmaker for the last 20 years, but he hasn’t done much for the province. When I served as the deputy prime minister of economy and education, I decided to establish the Paju LCD Complex despite objections from several government institutions. I also resolved the problem with Suwon Air Base, which residents had complained about for decades, and set up a high court and a family court in Suwon. Until two months ago, Nam was trying to be the floor leader of the [Saenuri Party], not Gyeonggi governor.”

What are you going to do once you are elected?

“My first priority is job creation. In 2006, the increase in the number of jobs in Gyeonggi stood at 62 percent, the highest in the country. But during the two terms of incumbent Kim Moon-soo, the rate dropped to about 17 percent and [Gyeonggi] ranked 12th among 16 metropolitan cities and provinces. I will arrange a 200 billion won ($195 million) fund to increase ‘hidden champion’ enterprises, which are favored by the younger generations, and create jobs for women, senior citizens and the handicapped. I am a person who knows the finance and business mechanisms to do so.”

What do you think of the controversy over your pledge to hire childcare teachers as government employees?

“My plan is to gradually apply the rules for public education officials also to child-care teachers in stages until 2019. The economic resources needed for Nam and I are the same. He also said in a speech at a child-care teachers’ forum on April 15 that the working conditions for child-care teachers should be equivalent to those of public education officials. It does not make sense that he says I will spend more money because he also wants to provide the same working conditions for public workers and expand national and public education facilities. The same size budget will be needed for both of us. Nam is criticizing one of my pledges, emphasizing ‘public officials’ rather than ‘better working conditions,’ to make it sound like I’m only trying to increase the number of government employees.”

The Saenuri Party insists your pledge for child-care teachers will devastate the Gyeonggi government’s finances.

“It is a matter of their will. When they are talking about ‘devastating the finances,’ it means they are not willing to do it. Nam also suggests designating quasi-public child-care centers, but he doesn’t seem to know the reality of those centers. The ongoing problem is a lack of national and public child-care centers, but he is suggesting quasi-public ones, which are not as good as national and public ones. Before making reckless promises, he should learn about the reality.”

What are you planning to do for the people grieving in Ansan over the Sewol ferry accident?

“The government designated the city as a special disaster zone, but people living in Ansan told me they are worried over whether [the designation] might serve as a reminder of the incident and be passed down to the next generation. I think we should call Ansan ‘the city of hope’ and make it a model in the implementation of systems from advanced nations. We will also provide support to the Sewol victims’ families as well as medical assistance.

The mayors of Los Angeles and New York in the United States have police and fire-fighting units under their command so they can promptly cope with emergency situations. I’m also thinking of establishing such a system under the Ansan mayor, as a partial reform to the national safety system.

And I will set up a city administration coordination committee, in which civic groups and the families of the Sewol ferry victims can discuss social issues. If the system is a success and spreads, it may be a good way of paying respect to the deceased.”

Gyeonggi residents are interested in increasing buses or extending subways because many of them are commuting to Seoul.

“They are interested in buses the most, but an increase in the number of buses may cause congestion. So I believe we should first concentrate on completing the ongoing extension of the subway lines. The progress has been sluggish because the provincial government has put in only 20 to 30 billion won a year. I will increase that amount to 100 to 150 billion won and finish the net-shaped subway lines as soon as possible. I’m also planning to implement a quasi-public bus system to increase lines and lower fares. Nam also has plans for a quasi-public bus system, but his is advantageous only to bus owners. My idea is to adopt a bidding system for each line so the government doesn’t need to compensate for the deficit, which is also expected to decrease passengers’ waiting time.”

The government prohibited passengers standing on red buses that run between Seoul and surrounding cities.

“The Ministry of Land, Infrastructure and Transport should have drawn up countermeasures first. [The authorities] should come up with measures, such as allowing chartered bus operators to deploy buses during commuting hours.”

Can you reform the “gwanfia” issue [the collusion between industries and officials who regulate them] as an ex-bureaucrat?

“I think I am the right person to do it. I know every detail of the bureaucracy. I have carried out unprecedented reforms, such as the real-name financial transaction system when I worked for the government administration. I’ve been proven by the public, having been elected as lawmaker three times.”