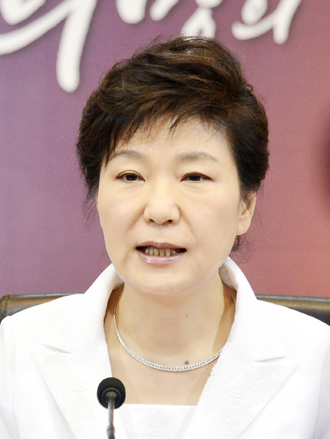 The education minister will assume deputy prime minister status and be responsible for education, society and culture, President Park Geun-hye announced in a cabinet meeting yesterday.

She also said the Ministry of Security and Public Administration will be renamed the Ministry of Government Administration and Home Affairs, the name it held from 1998 until 2008. Its control of government human resources will be transferred to the prime minister’s office and a “human resources innovation agency,” according to Yoo Min-bong, senior presidential secretary for state planning.

The prime minister’s office will also control another new agency to be responsible for national safety.

The two agencies will be headed by deputy ministers whom the government has yet to nominate.

The changes will be cemented in an amendment to the Government Organization Act that the administration plans to submit to the National Assembly next week. Under the amendment, the second phase of the Park administration will have 17 ministries, five agencies and 15 services after the addition of two agencies and two services.

The government’s attempt to reorganize itself in just a year is “heartbreaking,” said Yoo, a former bureaucrat and professor of public administration.

The latest changes come eight days after President Park unveiled a blueprint for restructuring the government while apologizing for the government’s poor handling of the Sewol disaster in an address to the nation on May 19. At that time, she didn’t mention she would establish another deputy prime ministerial post.

Yoo said the president recognized the need for fine-tuning control of economic affairs, diplomacy, security and other policy fields.

“Policy adjustment in fields outside of economic affairs, diplomacy and security should be made more efficient and a graver responsibility should be assigned [by having another figure assume responsibility],” President Park was quoted as saying by her senior secretary.

Prime ministers in Korea have little power, but they are forced to step down whenever a national scandal or disaster occurs to assume government responsibility. Prime Minister Chung Hong-won tendered his resignation in the wake of the April 16 ferry accident that took at least 288 lives.

A deputy prime minister for education is not entirely new. A similar post was created in 2001 under the Kim Dae-jung administration but was scrapped with the launch of the Lee Myung-bak administration in 2008.

With the name change, the Park administration spent 60 million won ($59,000) to replace sign boards and business cards for the ministry officials. Park’s presidential transition team insisted that placing security ahead of public administration was a way to better cope with national disasters and safety.

When it changed the ministry’s name, the new administration also placed a new Central Disaster Relief Headquarters under the ministry.

Meanwhile, the president again asked the prosecution to find and arrest Yoo Byung-eun, the de facto owner of Sewol operator Chonghaejin Marine Company, which operated the capsized Sewol ferry, as soon as possible so that the truth about him and his family be uncovered. “Although the Yoo Byung-eun family, the essential cause of the disaster, is supposed to regret their wrongdoings, they are mocking the law and incurring public rage,” she said.