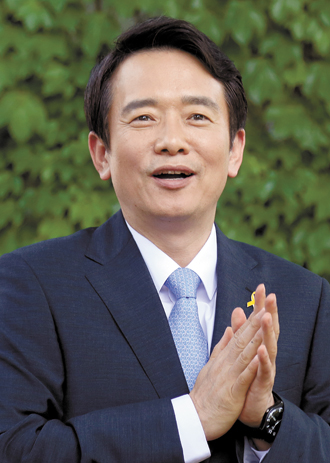 Nam Kyung-pil, the ruling Saenuri Party’s 49-year-old candidate in the Gyeonggi gubernatorial race, is a younger assemblyman who has called for renovations during his five terms as a lawmaker.

Sitting down with the JoongAng Ilbo on Thursday, Nam described the local elections on June 4 as “the judgment against the haves.”

He criticized the policies of his rival, Kim Jin-pyo, from the main opposition New Politics Alliance for Democracy (NPAD), saying, “When pledging to eradicate ‘gwanfia,’ his idea of increasing the number of public servants is anachronistic.”

Gwanfia is a term that refers to the corrupt connections between industries and the public officials who regulate them. The word is a portmanteau of the Korean word for officials, gwalyo, and mafia. Below is an edited excerpt from last week’s interview.

Q. Some are critical of the fact that you have called for renovation for the past 17 years but haven’t achieved anything.

A. “There have been practical obstacles in realizing my demands for renovation. But I didn’t give up and took one step at a time, calling for reforms. I believe such small changes have helped Lee Myung-bak and Park Geun-hye in their election as president. I promised to the people living in Gyeonggi to make the changes and renovations I have asked for so far.”

What do you think is your achievement as a politician?

“The first principle of my political philosophy is “authorities must be divided.” And the second is not to fight with political beliefs, but to work for the public. Now we take them for granted, but it was not easy to separate party hegemony and the presidency. We have also achieved the bottom-up nomination system for the June 4 elections. Powers should never be concentrated because they will easily corrupt. I’m planning to delegate the bloated powers of the provincial government to the cities and counties.

Some polls are showing Kim Jin-pyo’s approval rating has surpassed yours.

“Elections in the capital area are not running one-sided. My rating is temporarily down because the public is disappointed with the government and the ruling party over the Sewol ferry disaster. But the people who have turned their heads away have not directly gone to the main opposition party. The attitude and endeavors of the government and the ruling party will determine the result of the elections.

Do you believe President Park’s speech and the appointment of a new prime minister will be a turning point?

“The public demanded the government give a sincere apology, and I think the public may have been moved by the president claiming responsibility. Naming a new prime minister was even more important. Ahn Dae-hee, the new prime minister-designate, is a person who can root out [the government’s] evils. And I think President Park made it clear that she is willing to overhaul the entire country when she accepted the resignations of her aides, Nam Jae-joon, the director of the National Intelligence Service, and Kim Jang-soo, the head of the National Security Council.”

You are not part of the traditional pro-Park Geun-hye faction. Aren’t you worried about conflicts with the Blue House or the central government?

“If the Gyeonggi government does not cooperate [with the central government], the country’s leadership could be compromised. The president’s leadership should stay firm in times of crisis - amid the Sewol ferry accident, North Korea’s nuclear ambitions and Japan’s right to collective self-defense. But if the president becomes arrogant or opinionated, I am a person who can give good and sincere advice.”

The main opposition party blames the government for the Sewol ferry accident.

“It is unfair because all politicians are liable. Sinners may not judge other sinners. Of course, the ruling Saenuri Party is more responsible, but only the public may judge the evils. The opposition parties will also get more support [from the public] when they support the president.”

What is the meaning of the upcoming elections?

“In the wake of the Sewol ferry sinking, a ‘safe Korea’ has become the spirit of the age.

It won’t matter whether candidates are from a certain party or whether they are conservative or progressive. The elections will be the public’s judgment against the ‘haves.’ The people will no longer tolerate outdated practices and customs of the establishment. Politics is facing inevitable reform, which the public is demanding, and those who suit those demands will take leading roles in the future.”

How do you assess your counterpart Kim Jin-pyo?

“He is a great and experienced person with a government background. But the province needs a political leader, not an administrative or economic government official. What matters is leadership that can integrate both the ruling and opposition parties and hold the public together.”

You have condemned Kim for pledging to hire child-care teachers as government workers.

“When pledging to eradicate gwanfia, his idea of increasing the number of public servants is anachronistic. It is an old-fashioned populist idea by an ex-economic bureaucrat that does not take into account the lessons learned from the Sewol ferry accident. I agree that we should ameliorate working conditions for child-care teachers and raise children in better environments. But the monthly wage for government employees is 2 trillion won ($1.9 billion) in Gyeonggi alone and 7 to 8 trillion won nationwide. Taking into consideration the budget and pensions for retired government employees, it is impossible, and it is only a hollow promise to win votes from 70,000 childcare teachers.”

Are you giving up on votes from child-care teachers?

“Voters are wise. Some child-care teachers even called me and said they don’t trust Kim’s promises. I pledged to realize their wages and to guarantee legal holidays. Kim is an ex-economic government official and even criticized Kim Sang-kon, the former superintendent of the Gyeonggi Provincial Office of Education, for suggesting free buses in Gyeonggi. So I don’t understand why he promised [hiring child-care teachers as government employees] when it may cause national misfortune. I have to be the governor at least to stop it from happening.