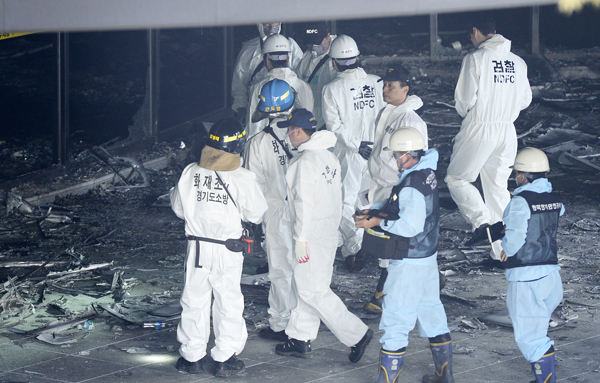 A fire that killed seven people at a bus terminal Monday may have been caused by a safety transgression and fast-and-loose construction methods just five and a half weeks after the worst maritime accident in the country’s history, which was also blamed on a lack of concern for public safety.

The blaze was caused by sparks from welders doing construction on a food court on the first basement level of the Goyang Bus Terminal in Gyeonggi. The number of the dead rose to seven overnight when a person who was in critical condition was pronounced dead. More than 50 others were injured.

CJ Foodville, an affiliate of CJ Group, commissioned a construction company to remodel the site to build a food court. The Ilsan Fire Station said construction was not supposed to have begun because the fire station hadn’t cleared the company’s request.

By law, when a company wants to do any renovation or expansion that will change safety features on a site, it must submit its plan and receive approval from a city government and a district fire station. In the case of the Goyang Bus Terminal construction, only the Goyang city government gave approval. Construction on the food court began May 8, and the contractor requested approval from the Ilsan Fire Station on May 22.

It did not receive the green light. The chief of the Ilsan Fire Station said inspectors were planning to visit the site on Monday, the day of the accident, to offer safety recommendations after reviewing the request.

“At the time the fire broke out, the construction company and CJ Foodville didn’t have any permission from us,” said Seo Eun-seok, chief of the Ilsan Fire Station. “I believe that fact will be confirmed by the investigation team.”

If either the contractor or CJ Foodville is found to have changed the location of the fire prevention shutters, they can be liable for punishment.

Police yesterday questioned the manager of the bus station and a welder to investigate the exact cause of the fire. The focus of questioning is whether they carried out safety precautions and complied with the rules for welding work.

The authorities also asked the National Forensic Service to do an autopsy of the bodies of the seven victims as part of the investigation.

The Ilsan Fire Station said that most of them died from smoke inhalation. The fire station told the Korea JoongAng Daily yesterday that two people are still in critical condition.

“The two people are in really serious condition while some of the injured people were released from the hospital,” said an employee of the fire station. “But we recommend them to stay because the effects of fumes and poisonous gases need to be closely watched.”

The chief of the Ilsan Fire Station said a fire shutter on the first basement level is presumed to have not functioned. Given that only one person was killed on that level, where the fire broke out, and the rest were killed from smoke that penetrated the second floor of the structure, the casualties may have been fewer if the fire shutter worked. It remains unclear whether the fire shutters failed to function in the proper way or whether construction workers deliberately did something to deactivate them.

The government seems to have failed yet again to keep a public place safe even after vowing to strengthen safety measures after the ferry disaster. The Goyang Bus Terminal was somehow exempted from a nationwide safety checkup. The government carried out safety inspections of major public places and mass transit facilities following the sinking of the Sewol, which claimed the lives of 288. But the bus terminal was not on the list for inspection.