Bullish on the pen, even complete games a rarity

Bullish on the pen, even complete games a rarity 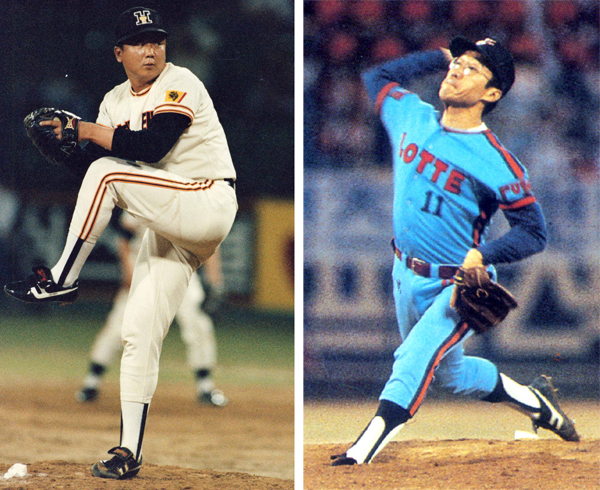 Sun Dong-yeol of Haitai Tigers, left, and the late Choi Dong-won of the Lotte Giants were two pitchers who were capable working into the late innings of a game. [JoongAng Ilbo, Ilgan Sports]

When Ryu Hyun-jin of the Los Angeles Dodgers flirted with a perfect game and a no-hitter against the Cincinnati Reds earlier this week, Korean baseball fans were beside themselves with excitement.

Maybe that’s because there has never been a perfect game in the 33-year history of the KBO and no-hitters are few and far between. The last no-hitter in the KBO was by Song Jin-woo, now the Hanwha Eagles pitching coach, against the Haitai Tigers, now the Kia Tigers, on May 18, 2000.

Never mind the lack of mound masterpieces, there have been no shutouts recorded so far this season in the KBO and only two complete games - by Rick VandenHurk of the Samsung Lions and Dustin Nippert of the Doosan Bears.

The pressure is especially intense on Yoo, who pitches for Ryu’s old team and collected a 700 million won ($683,900) signing bonus when he was drafted by the Eagles in 2011. It is the second-largest amount ever in the KBO after Han Ki-joo of the Kia Tigers got 1 billion won in 2006.

But the question is whether prospects like Yoo can potentially be more than just a decent pitcher who throws five or six innings per game these days.

“A complete game has become something only a few top pitchers can accomplish lately for sure,” says analyst Cha Myung-suk. “In a league like the KBO, where there are plenty of hitters who focus more on making good contact than on big swings, pitchers have to throw more pitches. And because managers are under a lot of pressure - much more than in the past - to make it to the postseason, they don’t hesitate to replace starters even in early innings.”

It has only been about a decade since KBO clubs started considering the bullpen a necessity in order to field a competitive team.

But after the Lions and SK Wyverns dominated the league over the past decade with their bullpens and flexibility with pitchers shifting between the pen and starting rotation, more teams have followed suit.

Since the KBO started tracking holds (HDs) as an official record in 2000 season, the first reliever to reach 100 HDs was lefty Ryu Taek-hyun of the Twins in 2009. Five others have done it since then.

“Under the trend, managers have hesitated to test young pitchers in their rotation and were often forced to shift their roles in the middle of the season,” Cha says. “The reason Ryu and Kim were able to become top starting pitchers who can go deep into a game was because they spent enough time in the rotation.”