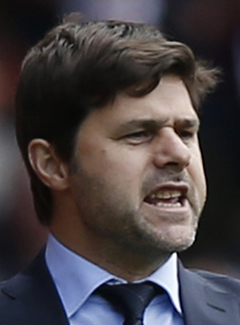 Tottenham hired Mauricio Pochettino as the club’s new manager on a five-year contract on Tuesday, with the former Argentina defender making the move from fellow Premier League side Southampton.

Pochettino replaced Tim Sherwood, who was fired on May 13 after just five months in the job following Tottenham’s sixth-place finish in the league.

The 42-year-old Pochettino developed a strong reputation for playing a positive, attacking brand of football in his 18 months at Southampton, which he joined from Spanish side Espanyol when he replaced Nigel Adkins. Southampton finished eighth in the standings last season, with its highest Premier League points haul of 56.

“This is a club with tremendous history and prestige and I am honored to have been given this opportunity to be its head coach,” Pochettino said. “There is an abundance of top-class talent at the club and I am looking forward to starting work with the squad. We are determined to give the supporters the kind of attacking football and success that we are all looking to achieve.”

Pochettino is the eighth permanent manager to be appointed in Spurs chairman Daniel Levy’s 13 years at the club.

“In Mauricio I believe we have a head coach who, with his high energy, attacking football, will embrace the style of play we associate with our club,” Levy said in a statement. “He has a proven ability to develop each player as an individual, whilst building great team spirit and a winning mentality. We have a talented squad that Mauricio is excited to be coaching next season.”

Tottenham aspires to qualify for the Champions League again, having played one season alongside Europe’s elite in 2010-11. Following the sale of winger Gareth Bale to Real Madrid for 100 million euros (then $132 million), the North London club went through a chaotic season that has featured defeats of 6-0 and 5-1 to Manchester City, 5-0 at home to Liverpool and a change of manager when Andre Villas-Boas was replaced by Sherwood.

Pochettino’s arrival could also help relaunch the career of forward Erik Lamela, who has struggled to adapt to the Premier League and was hampered by a series of injuries since joining the club for an estimated $50.41 million fee.

Although he was beaten twice by Sherwood last season, the former Espanyol boss led Southampton to its highest-ever Premier League finish. He will keep working with his own staff, with assistant coach Jesus Perez, first team coach Miguel D’Agostino and goalkeeper coach Toni Jimenez all following him to White Hart Lane.

Southampton said it has begun its search for a “high-caliber” manager, with Sherwood reportedly an option to replace Pochettino alongside the likes of Malky Mackay, Steve McClaren, Murat Yakin and Michael Laudrup.

“The club has been on a constant path of growth since the arrival of [the late owner] Markus Liebherr in 2009,” Saints Chairman Ralph Krueger said. “This growth took place before Mauricio came, it continued strongly under his leadership, and it will continue into the next season.”