Thunder storms back to even Western finals, 2-2

Thunder storms back to even Western finals, 2-2 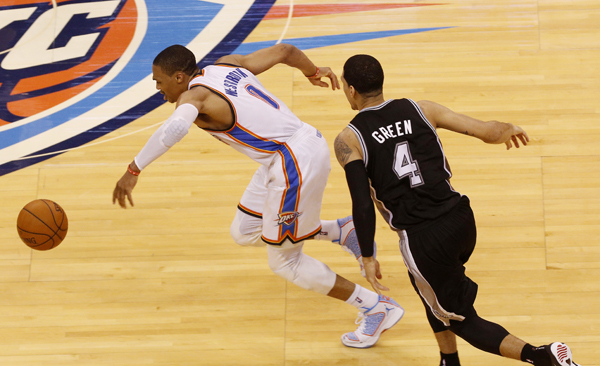 Thunder guard Russell Westbrook steals the ball from San Antonio Spurs guard Danny Green in the first half of Game 4 of the Western Conference finals Tuesday in Oklahoma City. Game 5 will be in Texas on Thursday [AP/NEWSIS]

Russell Westbrook had 40 points and 10 assists, and the Oklahoma City Thunder beat the San Antonio Spurs 105-92 on Tuesday night to tie the Western Conference finals at two games apiece.

It matched the second-highest playoff point total of Westbrook’s career after the 43 he scored in the 2012 NBA Finals. He also had five rebounds and five steals.

“I think I did all right. Coming out with a win is most important,” said Westbrook in a postgame interview with TNT. “I just try to come out and give maximum effort. My teammates ask that of me and that’s what I try to do on both ends of the floor.”

Kevin Durant added 31 points on 11-for-22 shooting. It was his highest-scoring game of the series after the NBA’s leading scorer was held to a 22.7-point average in the first three games.

Serge Ibaka added nine points and eight rebounds for the Thunder, who have turned around the series since he returned from an injury that was expected to keep him out for the rest of the postseason.

Boris Diaw had 14 points and 10 rebounds, and Tony Parker added 14 points for the Spurs, who blew a 2-0 lead against the Thunder in this round two years ago and are in danger of doing it again.

“We’re just going to have to play better, bottom line. We didn’t play well here. Now all we can control is Game 5,” Parker said.

In other off-court news, Donald Sterling, banned from owning a pro basketball team for inflammatory remarks about African-Americans, called the NBA’s action illegal because it was based on a “lover’s quarrel” that was “illegally recorded.”

“This was an argument between a jealous man and the woman he loved that should never have left the privacy of the living room,” Sterling said in a letter to the NBA obtained by the Los Angeles Times.

Sterling, controlling owner of the Los Angeles Clippers for 33 years, came under fire after TMZ.com posted an audio recording of him criticizing a female friend for publicly associating with black people, including NBA great Magic Johnson.

The NBA said in a statement on Tuesday night it had received a response from Donald and Shelly Sterling regarding his termination, and added that the league’s Board of Governors will hold a vote on eliminating Sterling’s stake at a hearing set for Tuesday, when he can address the charges before his fellow owners.