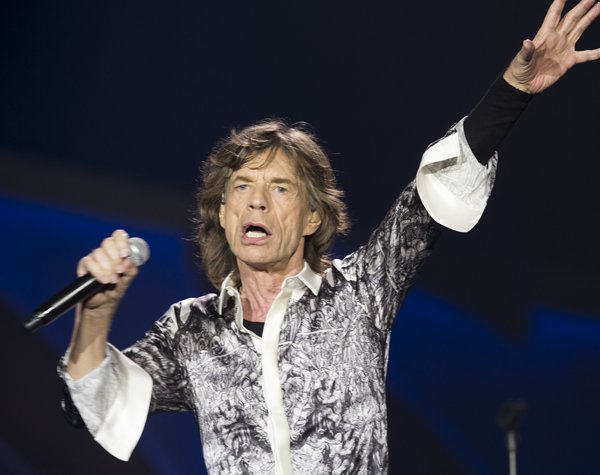 Rolling Stones singer and front man Mick Jagger performs during a concert in the Telenor Arena at Fornebu in Baerum just south of Oslo, Norway, on May 26, 2014. The Stones rock combo are on a worldwide tour billed as The Rolling Stones On Fire. [AP/NEWSIS]

OSLO - The Rolling Stones staged a high-energy concert in Oslo on Monday night, as the ever-youthful band resumed a 14-country world tour suspended in March after the death of Mick Jagger’s girlfriend, fashion designer L’Wren Scott.

In a video posted on Tuesday, starring guitarist Ron Wood, the band expressed how excited they were at the prospect of visiting Israel, which is one of the stops on their tour. They will be appearing at Tel Aviv’s Hayarkon Park on June 4.

Jagger, 70, wearing a tight black shirt and jeans for most of the late-night show in front of more than 20,000 spectators in Oslo, said he was happy to be back performing in the Nordic city where the band first played on a tour in 1965.

Jagger told the audience the band had asked people to request songs over the Internet and joked that the favorite had been “Take on Me” - a hit by Norwegian rock band A-ha.

He said the singing was too high pitched for him and launched instead into the Rolling Stones’ “Let’s Spend the Night Together.”

Israeli fans are also invited to suggest a song via the band’s website or mobile app.

Monday night’s concert, with hits including “Satisfaction,” “Brown Sugar” and “Sympathy for the Devil,” was the first of a European tour that will now go to Lisbon and then Zurich.

The Rolling Stones postponed concerts in Australia and New Zealand in March to mourn Scott, a 49-year-fashion designer and former model who committed suicide in her Manhattan apartment.

Jagger said on his website just after her death that he was struggling to understand “how my lover and best friend could end her life in this tragic way.”

He did not refer to Scott during the Oslo concert. The Australian and New Zealand concerts have been rescheduled for October and November. Norwegian media hailed the band’s performance, praising Jagger for his singing as well as joking, dancing, running and pirouetting around a vast stage.

“It’s rock and roll and we like it,” the tabloid Dagbladet wrote, giving the concert five on a one to six scale. Rival tabloid Verdens Gang also gave the concert a five and said that the band had clearly benefited from a few days’ practice together in Oslo before the concert.