[Sponsored Report]High-tech cables give LS a boost in revenue

[Sponsored Report]High-tech cables give LS a boost in revenue 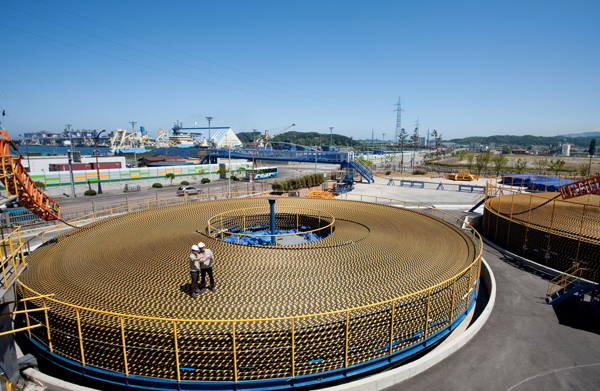 Employees of a LS Cable and System plant in Donghae, Gangwon, ship submarine cables. Provided by the company

LS Cable and System, the nation’s largest cable maker, plans to expand its market share of new products such as submarine cables and high-voltage direct current (HVDC) cables as well as high-value products such as extra-high voltage cables over 380 kilovolts.

The company has grown mainly because it has diversified its overseas market. The company currently focuses on markets in Asia and the Middle East. The target markets for its expansion are Africa, Europe and North America. Cross-selling with foreign partners will create synergy in promoting its products to potential clients in new markets.

The company’s performance in the Middle Eastern market is remarkable. LS signed a $100 million contract with Qatar General Electricity and Water Corporation in 2011 to provide extra-high voltage cables when the country was in a financial crisis. The following year, Kuwait’s Ministry of Electricity and Water signed a $110 million contract with LS. In order to compete with manufacturers that offer lower prices, LS will emphasize its high-value products such as extra high-voltage cables.

LS is also recognized in various Western markets. In 2006, it signed a contract with Long Island in New York. The company also won orders from the French Electricity Board (EDF) in 2012 and Southern Maryland Electric Cooperative in 2013. This year, LS expects more contracts in other areas such in South America and Africa.

The new products of LS - submarine cables and HVDC cables - are also scoring high. In 2009, the company invested 180 billion won ($176 million) to build the first submarine cable plant in Korea in Donghae, Gangwon. As the company entered the oligopolistic market, which was taken up by a few European corporations, many clients from Asia, the Middle East, Europe and South America started ordering huge quantities.

Submarine cables can connect two continents or mainlands with islands. Because the orders come in large quantities, all of the related processes such as production, transportation and installation require skillful technology. LS demonstrated its ability to handle such orders when it worked in 2012 with Qatar Petroleum, which set the highest record in the national cable industry with $435 million in sales. Venezuela, Denmark and the Netherlands were among the earliest clients of submarine cables from LS.

“The systematic work from our experienced experts will be distinct from the services of the late starters in the cable industry who compete at a low cost,” said an LS Cable and System official.