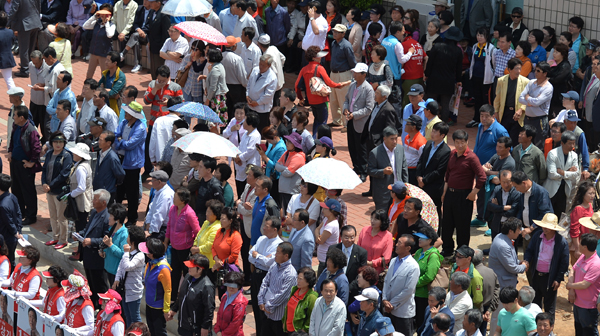 Despite bipartisan pledges to wage a campaign free of mudslinging, many candidates on both sides of the political divide are indulging in negative campaigning with local elections only six days away.

In a campaign without major policy issues and permeated by public anger and grief in the wake of the Sewol ferry disaster, the two major parties have settled on the expediency of attacking rival candidates in the lead-up to the June 4 elections.

In the most closely watched race, the fight for Seoul’s mayoralty, incumbent Park Won-soon of the New Politics Alliance for Democracy and Saenuri Party challenger Chung Mong-joon have traded barbs about members of each other’s families.

The first attack was launched by Chung last week, who questioned why Park’s wife had remained out of the public eye.

“The rumor is swirling that Mrs. Kang Nan-hee (Park’s wife) already left the country because she is nowhere to be seen,” said Jeon Ji-myong, a spokesman for Chung’s campaign team, on Saturday. “Park has touted himself as being a people-friendly politician at a time when his wife is not even seen in public, not to mention doing volunteer work for the people. Park needs to clarify the rumor.”

Park’s camp was quick to fire back.

“We advise Chung to mind his own family members: his wife and youngest son,” taunted Jin Sung-joon, a spokesman for Park’s campaign in a statement issued on the same day, referencing a controversial remark posted in April by Chung’s youngest son on Facebook, in which he criticized relatives of the victims of the Sewol disaster for “being uncivilized” for yelling at government officials.

Park personally denounced the Chung camp’s remarks about his wife, warning he will seek “legal, political and social responsibility for a smear campaign” against his family.

The accusations didn’t stop there. Chung also questioned Park’s allegiance to the country, saying that Park once supported the abolition of the anti-communist National Security Law.

“Park once claimed that one should be able to praise (North Korean founder) Kim Il Sung at Gwanghwamun Square because of our freedom of expression,” said the former presidential hopeful on May 16 in an apparent attempt to paint the sitting mayor as being pro-Pyongyang.

The NPAD fired back by drawing in Chung’s father, the late founder of the Hyundai Group, who visited North Korea a number of times in pursuit of business opportunities.

“Chung Ju-yung, the father of candidate Chung, once called the North Korean leader ‘Dear Marshall Kim Jong-il’ during a visit to North Korea,” the NPAD said in a statement. “We want to ask Chung: was your father a Pyongyang follower?”

Dissing a rival’s reputation and even their relatives is also being done in other races. Analysts say this campaign is devoid of policy issues since the Sewol sinking has robbed the campaign of any other topics.

“In the aftermath of the Sewol sinking, candidates are running ‘low-key’ campaigns, which makes it much more difficult (for them) to focus on campaign promises,” said political science professor Park Myung-ho of Dongguk University. “So instead they’re forced into last resort negative campaigning.”