In Pyongyang, the Moranbong Band a major hit

In Pyongyang, the Moranbong Band a major hit 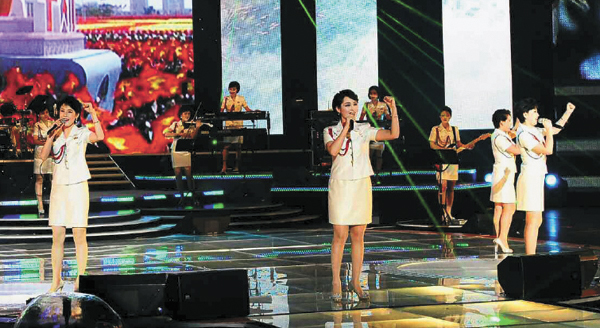 Members of North Korea’s Moranbong Band perform on March 24 at the April 25 House of Culture in Pyongyang. Their concert featured a big projection screens and a laser-light show. [Rodong Sinmun]

With outstanding vocal performances and beautiful singers, the ensemble’s popularity has skyrocketed in the North Korean capital. The band’s concerts, complete with big screens and a laser light show, are also something of a novelty in the country, where such events are a rarity.

Unlike many of South Korea’s K-pop acts, whose members appear nearly unapproachable, Moranbong’s members present a girl-next-door image. They stretch out their hands to the audience and are the first to suggest photo ops with their fans.

On Monday, the North’s official Rodong Sinmun praised the Moranbong band, calling their show “a spectacular concert that must be seen repeatedly,” adding that the girls were “a charming group with their own significant character.”

The group has apparently supplanted the old school Unhasu Orchestra, the favored band under the rule of the late leader Kim Jong-il.

The Moranbong Band’s immense following just two years after their debut comes as no surprise given that North Korea’s first lady Ri Sol-ju attended their concert in July 2012 in her first public appearance. At the time, it was the band’s first performance as well.

But if you closely look at their previous concerts, which were broadcast by state media, it’s obvious that something has changed.

In the beginning, the ensemble’s performances were dominated by typical Communist-style propaganda pieces. But as time went on, their repertoire has become increasingly westernized, ranging from the music of Mozart to a cover of the “Rocky” theme song.

The girls have branched out, too, playing “O Sole Mio,” “Swan Lake” and even some American pop songs. Their instruments are also exceptional, all things considered: The Moranbong Band uses a Japanese-brand Roland digital piano and drum kit, a Korg synthesizer, a Yamaha piano and other designer-brand musical accessories.

When asked why Pyongyang - which is known for its strong anti-Japanese sentiment - uses Japanese-brand instruments, pianist Kim Cheol-wung, a defector, responded that, “Starting with the rule of Kim Jong-il, all the bands under his direct control used world-class instruments, including Japanese products.”

When these products wear out, they’re handed over to the ruling party’s more mediocre musicians, he added. Among the Moranbong Band’s members, Hyon Song-wol, its leader, is perhaps the most notable. She once drew attention as a singer with the Unhasu Orchestra for her song “Excellent Horse-like Lady” - a term used in North Korea to describe a heroic worker.

Alleged to be the ex-girlfriend of Kim Jong-un, Hyon was once rumored to have been executed following a sex scandal involving the orchestra last year. Various media outlets, including Japan’s Asahi Shimbun reported on Sept. 21 that some of the orchestra’s members had been put to death for filming themselves having sex and then selling the films as pornography.

The media reports on her purge were all confirmed to be erroneous, however, when she made a public appearance at an arts conference this month in Pyongyang.

“Although it is true that some Unhasu Orchestra members were executed for the sex scandal in July 2013, Hyon was not affected by the scandal,” a South Korean intelligence official said. Since then, the Unhasu Orchestra was reported to have disbanded, sources said.

But it’s clear in analyzing the performances of the Moranbong Band that the regime has used the group for political means to rally public support for young leader Kim Jong-un.

On Monday, the Rodong Simun said the girls were “the soldiers at the forefront who are supporting politics and our great leader through music.” After their performance, the band members rushed over to Kim, applauding him and emphasizing his “love and consideration.”

However, as with all bands under the direction of the Communist regime, the all-female group has an expiration date, which will likely come whenever they fall out of favor with the young dictator. After the death of his father Kim Jong-il, Jong-un abandoned his father’s Unhasu Orchestra, boosting up the Moranbong Band, his own personal favorite.

For now though, they are basking in their heyday and are set to appear at the upcoming Asian Games in Incheon, where they are accompanying North Korea’s star athletes. Similarly, in 2005, Ri Sol-ju attended the Asian Athletics Championships in the South as a cheerleader. So until Pyongyang’s next biggest act emerges, the Moranbong Band is here to stay.