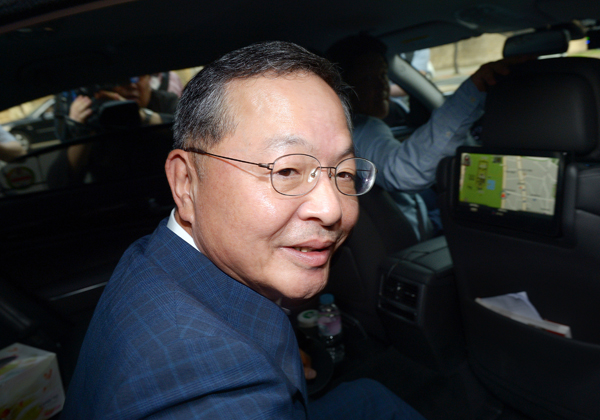 Ahn Dae-hee gets into a car yesterday after a press conference in which he announced his intention to abandon his nomination as prime minister. [NEWS1]

After being accused of making a fortune in just five months after retiring from the Supreme Court and possibly breaching ethical standards, Ahn Dae-hee withdrew his nomination for prime minister, striking a blow at President Park Geun-hye’s efforts to clean up the government after the Sewol ferry tragedy in April.

“I intend to withdraw my nomination for prime minister today,” said a grim-looking Ahn at a 5 p.m. press conference yesterday. “I am very sorry for having disappointed the people over a series of suspicions about collusive ties [between the private and public sector].”

“It is also overbearing for me to watch the suffering of my family, who have given me strength, and clients who entrusted me to represent them [in court],” Ahn said. “I wish to return to life as an ordinary citizen.”

Ahn apologized to the president yesterday, whom he said had trusted him enough to serve as the prime minister.

The withdrawal of the former prosecutor, who had a reputation for integrity and was nicknamed “Mr. Clean Hands,” is a big setback to Park’s declared mission to root out corrupt practices in the public sector. Collusive ties between civil servants and the industries they are supposed to regulate have come under scrutiny since the Sewol sinking, which was partly blamed on such government practices.

Ahn’s quitting came six days after he was nominated by the Blue House. It is the second time one of Park’s nominees for the prime ministership was forced into giving up.

“We should discuss bringing a change to a vetting process that now focuses on personal matters, not on the full extent of a nominee’s capabilities,” said Park Dae-chul, spokesman of the party.

It was initially expected the former prosecutor would have an easy confirmation given his reputation as Mr. Clean Hands and long years in public service fighting against misdeeds and corruption. But the tide swiftly changed after it was learned that Ahn amassed 1.6 billion won in just five months as a lawyer one year after he left the Supreme Court.

Additional allegations over a breach of ethical standards were raised yesterday by the opposition New Politics Alliance for Democracy. The party said that Ahn’s oldest son, who is 25, landed a lucrative job as an employee of a foreign financial institution despite a lack of experience thanks to his family background.

Another allegation was raised about Ahn’s use of his office budget as a Supreme Court justice.

Representative Seo Young-kyo of the NPAD said yesterday that Ahn might have stashed away a budget meant to be spent on office activities during his two-year tenure as a Supreme Court justice.

Seo said that Ahn’s bank account balance rose 100 million won during his two years as justice, and the office budget for justices was approximately 45 million won a year.

“Anyone can do the math,” he said.

As head of a special investigation team at the Supreme Prosecutors’ Office during the administration of President Roh Moo-hyun, Ahn got to the bottom of a scandal involving illegal campaign funds amassed by the Grand National Party, the ruling Saenuri Party’s precursor.

Ahn also ran an investigation into the illegal funds flowing into Roh’s campaign team and arrested An Hee-jung for election fraud. An, then Roh’s confidant, is now seeking gubernatorial re-election in South Chungcheong.

Ahn was also known as “The People’s Prosecutor,” which was one of the reasons Park nominated him as prime minister in the wake of the ferry disaster and her vows to clean up Korea.