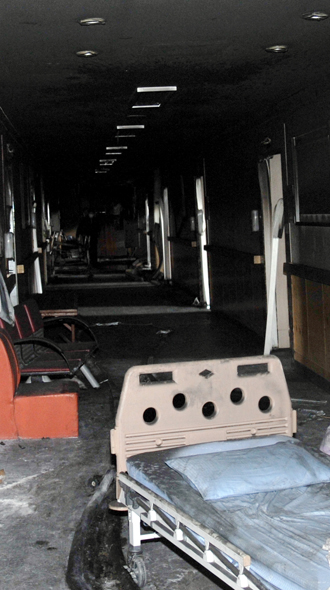 Burned sick beds and seats yesterday are deserted in the hall on the second floor of an annex building of Hyosarang Hospital in Jangseong, South Jeolla, where a fire claimed 21 lives and injured 8 people. [NEWSIS]

A fire at a private hospital for patients suffering chronic diseases killed at least 21 and injured eight, police officials said, while the country reacts nervously to accidents in the wake of the sinking of the ferry Sewol.

Police said the fire was probably started by one of the patients, an 81-year-old man with mental problems.

The blaze began at around 12:25 a.m. yesterday in a storage room on the second floor of a three-story annex of a long-term chronic care hospital in Jangseong County, South Jeolla, where many elderly patients with Alzheimer’s disease or other chronic diseases lived.

Six of the eight injured were in critical condition, police said.

Police said all of the 21 dead, including an auxiliary nurse, were on the second floor, where a total of 34 patients and the nurse lived. All 44 people on the annex’s first floor were evacuated.

The fire was reported by a nurse in the main building at 12:27 a.m. The 119 rescue squad arrived at the scene in four minutes, officials said. They put out the blaze in around two minutes.

The rescue workers said most of the victims died of smoke inhalation.

“There were some beds, blankets and mattresses in the room and they released a lot of toxic gases when burning,” a firefighter told the JoongAng Ilbo. “Although the blaze barely spread to the corridor, the smoke moved through the other rooms.”

“The blaze was not that big,” Lee Min-ho, head of the Damyang Fire Fighters’ Office, said at a press meeting yesterday. “They died of suffocating on the gas as there was a lot of smoke.” 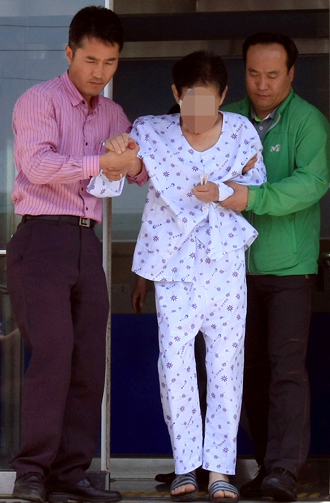 Police arrested an 81-year-old patient surnamed Kim on suspicion of arson after surveillance camera footage showed him entering the storage room minutes before the fire began. The man was arrested at a nearby hospital after he was evacuated from the blaze.

“He is denying his charges, but we are focusing on the possibility of arson,” Roh Gyu-ho, head of the Jangseong County Police Station, said at a briefing. “At 12:06 a.m., he was photographed leaving his room and he entered a toilet at 12:08 a.m., and then the storage room at 12:16 a.m. When he entered the storage room, he brought something like a blanket. Police obtained a discarded lighter from the scene.”

The suspect was admitted to the hospital May 1 with cerebral problems, police said. Whether he suffered from Alzheimer’s disease or a cerebral infarction was not confirmed.

Five of the 35 patients on the annex’s second floor were bedridden and 25 were suffering from Alzheimer’s disease. Five had other chronic diseases, police said. Nineteen of the dead and injured people were in their 70s or 80s.

Some relatives of the victims are criticizing the management of the hospital and argue that some patients were tied to their beds or locked in their rooms.

Officials at the hospital apologize to the families of the killed and injured yesterday. [NEWSIS]

“It is apparently a mistake of the nursing home, where only one nurse was working [on the second floor],” Lim Chae-hwi, a representative of the families, said in a joint statement yesterday. “We have some testimony from the families saying some patients who died in the fire had scars on their wrists apparently because of being tied to their beds, and were given excessive amounts of tranquilizers.”

“There was an emergency exit near the elevator, but you had to first pass through an automatic glass door to get to it,” said Kim Do-hyeon, whose father died in the fire. His father was in the hospital for alcoholism.

“That door is only opened by nurses to keep patients from getting out. It’s a lie that some of the patients couldn’t get out by themselves. Most of them could walk by themselves.”

Relatives also claim they have photos of the bodies with the scars from being tied with ropes and evidence they were over-tranquilized. But they did not release the evidence to reporters.

The first responders denied those allegations.

“Media reports that some patients were tied to their beds by their wrists were not true,” Lee, head of the Damyang Fire Fighters’ Office, said at a briefing. “Rescuers reported to me that they didn’t cut ropes off any patients.”

Authorities said they did not find a sprinkler system in the building. Newly revised regulations by the Ministry of Health and Welfare exempt small hospitals and private hospitals for seniors from the requirement to be equipped with sprinklers.

Founded in 2007, the hospital is authorized by the Health Ministry as a specialized facility for elderly patients suffering long-term chronic diseases, including Alzheimer’s disease or strokes, with 53 rooms and 397 beds.