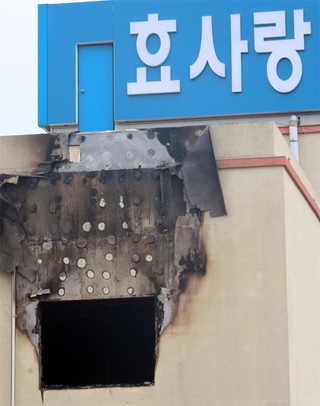 Fire broke out at a local hospice in Jangseong, South Jeolla, killing 21 people and injuring eight.

The blaze took place at the second floor of the annex of the nursing home at 12:27 a.m. today, where a total of 35 people, including one nurse, were staying. All of the 44 people at the first floor were safely evacuated.

The 119 rescue squad arrived in four minutes after the fire broke out at 12:31 a.m., and extinguished the blaze in two minutes.

Police is investigating the reason of the fire, but they assume a possibility of short circuit.

Most of the casualties and injured were elderly in the hospice, police said. There were 19 patients aged in their 70s or 80s.

Despite the instant extinguishing work by the rescuers, police said most of the patients were elderly lying on their beds, and they helplessly inhaled the toxic gas from the fire without escaping from the building immediately.