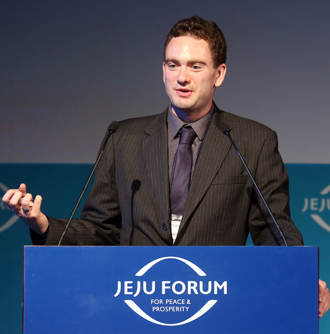 Daniel Tudor, former correspondent for the Economist. By Kim Seong-ryong

Over the past decades, Korea transformed from a shattered, war-torn country into an economic powerhouse. The rapid development came with a series of challenges regarding the environment, diplomacy, excessive education and safety.

The ninth Jeju Forum that kicked off yesterday at the Haevichi Hotel and Resort on Jeju Island will analyze pressing issues in Korean society and discuss potential solutions by bringing together more than 3,000 participants including professors, journalists, students and NGO workers.

Under the theme “Designing New Asia,” the three-day event consists of 64 sessions on a wide range of issues, such as international cooperation and security, business and the economy, the environment and sustainability, gender issues and plans for the scenic resort island.

The forum’s opening session was presented by Daniel Tudor, a former Korea correspondent for the Economist and the author of the book “Korea: The Impossible Country.”

He said the attitude was evident following the sinking of the Sewol ferry last month.

“After the accident, people often told me that the accident shows that Korea is still not a developed country,” he said. “There is an endless comparison and nagging sense of ‘we are not what we should be.’ I think this won’t help Korea achieve more.”

After the special session, topics discussed included the Korean education system in light of the country’s performance on the Program for International Student Assessment (PISA), strategies to increase wind power on Jeju Island, promote tourism and the role of women in the future.

While the first day’s topics are considered relatively soft, today’s sessions are inclined toward diplomacy and security.

On the final day, Carly Fiorina, former CEO of Hewlett-Packard, will present a speech on entrepreneurship and female leadership. Cho Yoon-sun, minister of Gender Equality and Family, will serve as a moderator for the discussion and will also share her views.

The forum is hosted jointly by Jeju Special Self-Governing Province, the JoongAng Ilbo, the International Peace Foundation and the East Asia Foundation.