Man sets fire on Seoul subway, but no one hurt

Man sets fire on Seoul subway, but no one hurt 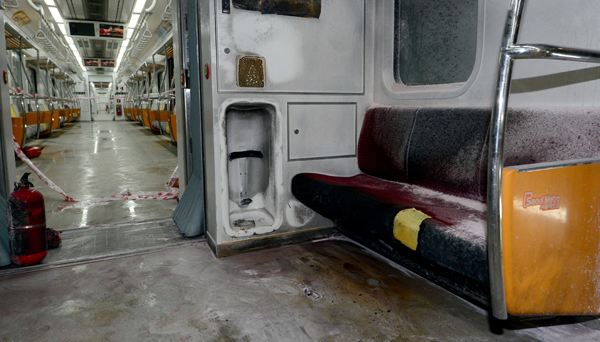 An incinerated Seoul Metro line No. 3 passenger car after an arsonist set fire to it yesterday morning as the train approached Dogok Station in Gangnam District. About 370 passengers were forced to evacuate. [NEWS1]

Hundreds of passengers were forced to evacuate the subway yesterday morning after an arsonist ignited a fire in a car on Seoul Metro line No. 3 that was arriving at Dogok Station in Gangnam District, southern Seoul.

No serious casualties were reported, and the fire was contained in less than 10 minutes.

According to officers from the Suseo Police Precinct, an elderly man set fire to seats in a passenger car at about 10:54 a.m. after dousing it with a flammable liquid.

Approximately 370 passengers were forced to flee the eastbound train, mostly out toward Dogok Station. About 100 passengers who were near the back of the train got out through Maebong Station, the previous stop.

More than 270 firefighters and emergency workers, as well as 69 fire trucks and other rescue vehicles, were mobilized to Dogok Station, which is linked to both Seoul Metro line No. 3 and the Korea Railroad Corporation’s Bundang line. It also has passageways connecting to luxury high-rise apartments.

The suspect, a 71-year-old man surnamed Cho, was apprehended shortly after the incident. He was being treated for minor burns in a nearby hospital when police arrested him about half an hour after the fire. Cho reportedly posed as an injured passenger at the station to avoid suspicion.

Cho told police that he was attempting to commit suicide. He also testified that he was involved in a lawsuit for damages incurred when a septic tank overflowed at a business he operated 15 years ago.

“While I was compensated, the amount was so much lower than I had anticipated, so I set the fire on the subway to protest the unfairness through committing suicide,” he said.

Cho was said to have carried on two bags filled with 11 containers of flammable liquid, which appeared to be paint thinner, and butane gas canisters, police said.

A 63-year-old woman was transported to a hospital after hurting her ankle slightly during the emergency evacuation, though there were no other reported casualties.

The incident yesterday was just one of a string of unsettling accidents to have struck Korea over the past month as it focuses on bolstering public safety in the aftermath of the Sewol ferry disaster, which left more than 300 people dead or missing.

The arson yesterday was reminiscent of an incident on Feb. 18, 2003, in which a 56-year-old man set fire to a Daegu Metropolitan Subway train at Jungangno Station. Approximately 192 people were killed and 151 injured in the blaze.

Yesterday, another fire broke out at around 9:06 a.m. in the parking lot of a Dongdaemun Homeplus in northern Seoul, resulting in about 35 million won ($34,268) in property damage.

The fire started from the engine of a Kia Sorento passenger car belonging to a 50-year-old man surnamed Kwon that was parked on the fifth floor of the seven-story building. No casualties were reported and the blaze was extinguished in about 30 minutes.

On Tuesday, a large fire also broke out at 5:56 p.m. in a three-story building of a waste disposal business in Sihwa Industrial Complex in Siheung, Gyeonggi.

The blaze spread to nearby buildings and took authorities more than two hours to put it out.

A 52-year-old man received serious burns and was taken to a hospital.